Just how much do you really know about wildlife in Australia?

There’s no denying that wildlife in Australia is among the most unique in the world. From devils in Tasmania to koalas in NSW and crocodiles in the NT, we spotlight just what makes Aussie animals so special. And where you can see them – sustainably – in the wild.

From elusive ‘drop bears’ to locals riding kangaroos to work, fables have always surrounded wildlife in Australia. Perhaps because the continent boasts some of the world’s quirkiest endemic species.

Case in point the thorny devil, whose ‘false head’ is designed to confuse predators. And the wombat, whose droppings are square. And the echidna, with porcupine-like spines, a bird-like beak, a kangaroo-like pouch, a penguin-like waddle, and a reptile’s egg-laying skills. And that’s not even touching on the unique marine animals or insects…

Given the size of the country, it’s no surprise that local wildlife in Australia has adapted to each state – and again to each corner of that state.

To celebrate World Animal Day (October 4) and the creatures that make the Land Down Under so, well, remarkable, here are some of our favourite critters to scout on your next travels with AAT Kings. 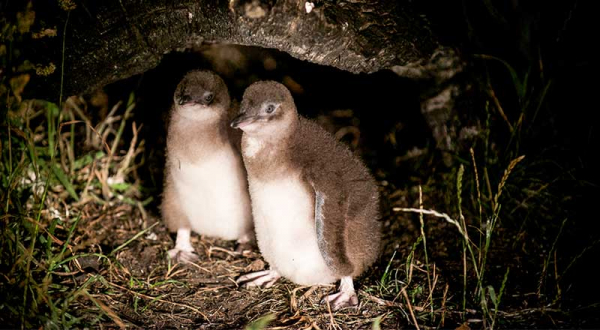 Did you know that Tasmania has no wild koalas? Neither any kookaburras until introduced from the mainland in 1902?

Being an island, Tassie is its own wildlife microcosm. Look no further than the Tasmanian devil, that rotund marsupial with endless allure – until it opens its mouth and lets out a shriek, that is. While their population has been in decline due to facial tumours, signs of population recovery abound, both in sanctuaries and in the wild, including at Maria Island and in the national park at Cradle Mountain.

The latter site is also a habitat of the eastern quoll, another animal bespoke to Tasmania. It hasn’t been spotted on the mainland since 1963. The ferret-like marsupial looks cuddly but has been known to fight devils over food.

The quoll shares its home with Bennett’s wallabies, which not only hop, but also crawl and swim. Fun fact: an albino one lives on Bruny Island.

From land to water to skies, this mini-Eden is also home to little penguins (though tragically not on Maria Island, per aforementioned devil rebound), 12 endemic birds, dolphins and platypuses. Not to mention an immense number of whales and seals.

Want to spot wildlife in Tasmania? Check out these tours:

Despite its mere 800 square kilometres, the ACT packs a lot of wildlife into its borders – thanks largely to the state’s vast woodlands, eucalypt forests and alpine areas. These are each a natural magnet for the usual suspects, like kangaroos, emus and wombats. But you may also spot some of Australia’s rarest endemic fauna: keep your eyes peeled for the dramatically-coloured, if sadly rare, corroboree frog.

You’ll hear the gang-gang cockatoo before you see it. These chattery creatures – the ACT’s bird emblem – have a scarlet red head (well, males do) and grey-and-white striped body. They’re monogamous, so you’ll spot them in pairs, canoodling. This is just one of 290 bird species recorded across the state. Small wonder it’s a dream for avid twitchers.

Want to spot wildlife in ACT? Check out this tour: 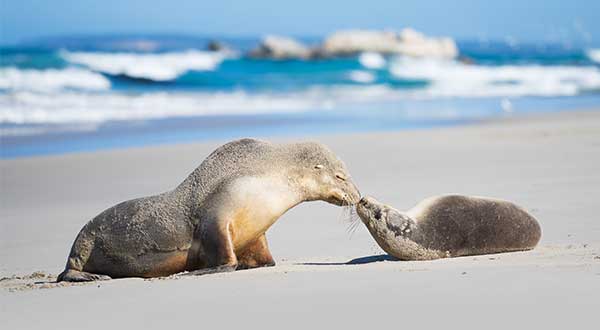 South Australia is often called a ‘zoo without fences’, so abundant are the state’s animals. Which means plenty of opportunities to take a selfie with a kangaroo in the wild, spot koalas snoozing with their joeys or get giddy watching southern right whales breach and blow along the coast.

A great place to experience all three (time of year permitting) is on Kangaroo Island, the mini-Galapagos where fur seals frolic in the waves and sea lions tumble down sand dunes into the sea. True to its name, KI (as it’s fondly known) is a mecca for ’roos, but also boasts one of the highest concentrations of koalas in the country.

Perhaps the state’s most unusual creatures are the giant cuttlefish that flock to the waters of Whyalla on the Eyre Peninsula between May and August. Only here can you spot this magical marine species, which congregate in the thousands to breed and play. ‘Giant’ for their family, these creatures weigh up to 10 kilograms, and are masters of camouflage, changing both appearance and shape to resemble their surroundings – whether rocks, sand or seaweed.

There must be something in the water along the Eyre Peninsula, as Australian sea lions also love to swim along the coastline here.

Want to spot wildlife in South Australia? Check out these tours:

Wallabies, kangaroos, wombats, platypuses, lizards, cockatoos, crimson rosellas, yellow-tailed black cockatoos, lyrebirds… the roll-call of animals that thrive in Victoria’s high country home is jaw-dropping. If you get very lucky, you may also see one of several rare species, including the endangered Baw Baw frog, mountain pygmy possum (the world’s only sub-alpine marsupial) and the endangered Leadbeater’s possum.

Perhaps the state’s most famous animal is the little (fairy) penguin. Philip Island is home to the world’s largest colony of these oh-so-cute birds, which waddle up the sand each evening to reunite with their families and slip into burrows.

Bust out your binoculars to ogle the native birdlife in the Dandenong Ranges, where sightings of superb lyrebirds, currawongs and red wattlebirds are practically guaranteed. Or further afield in Crojingolong National Park, home to a staggering one third of all of Australia’s bird species.

Want to spot wildlife in Victoria? Check out these tours:

Wildlife in the Northern Territory 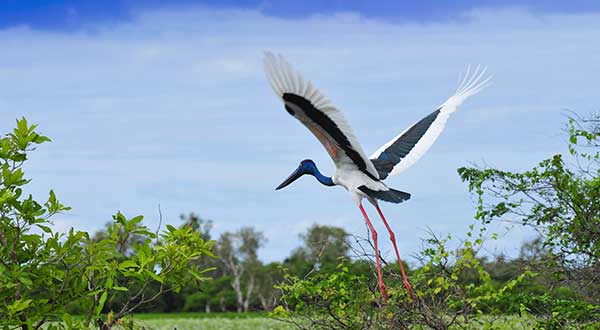 From Arnhem Land to Kakadu, Katherine to Uluru, the NT is one of the last remaining large-scale natural areas on Earth. Waterfalls tumble into cool swimming holes, rainforest clings to precipitous gorges, and wetlands heave under the weight of mangroves. It’s no surprise the state is a playground for 100 mammals, 225 freshwater fish, 40 per cent of Australia’s reptiles and 460 species of birds – many of them endemic.

Prettiest of all is the Gouldian finch, native to Australia and dressed in a rainbow of colours. Think, a Mondrian painting, but with even more colours and delicate birdsong. A mere 2,500 of these eye-popping birds remain in the wild, and they love the national parks (particularly Nitmiluk in Katherine) and lowland areas of the NT.

If you feel you’re being watched when you visit Nitmiluk, it may be the eyes of freshwater crocs (and the occasional saltie) that call its gorges and rivers home. As do marine turtles, which glide through the waters of Kakadu National Park, spanning 20,000 kilometres of World Heritage-protected land.

Want to spot wildlife in NT? Check out these tours:

Every year, 25,000 whales steam up the east coast of Australia. Pick a perch: you can see them playing offshore in Sydney, but they linger in the waters around Jervis Bay to feed their calves and frolic with local dolphins before heading south to Antarctica.

These gentle giants are also a regular sight off the state’s north coast, from Byron Bay and Coffs Harbour to Port Macquarie. Drop in to the latter town and its surrounds for a koala sighting – the area enjoys one of NSW’s highest concentrations of these cuddly marsupial. The local koala hospital helps ensure the longevity of the species for future generations.

The chances of spotting a platypus in the state are slimmer, unless you know exactly where to look. A good place to start is the Jenolan Caves in the Greater Blue Mountains World Heritage Area, just 2.5 hours west of Sydney. This enigmatic native animal is shy, but it’s regularly spotted here. Just monitor the ripples on the surface of the Jenolan River.

Want to spot wildlife in NSW? Check out this tour: 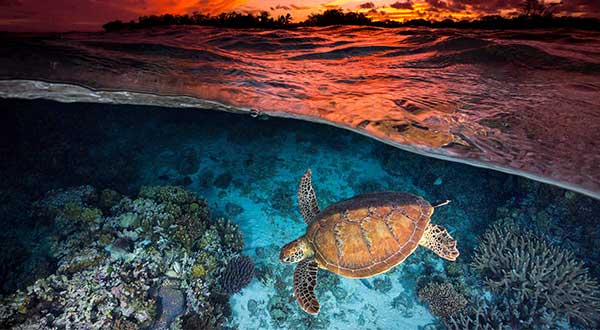 Queensland’s wide open spaces and protected World Heritage areas are some of the most biologically diverse environments on Earth – both plants and animals. One species you mustn’t miss is the southern cassowary, Australia’s largest flightless bird. Notoriously hard to find, your best bet is in the ancient rainforest surrounding Cairns.

While in town, it would be remiss not to dive into the world’s largest living organism: the Great Barrier Reef. Prepare for a kaleidoscope of colours and flurry of wildlife. Over 1,500 species of fish, 215 different birds, 3,000 molluscs, six of the world’s seven marine turtle species, and 30 species of dolphins and whales are residents. In fact, this is the only place on the planet where dwarf minke whales congregate, every June and July.

The other curious character in this part of Australia is the tree kangaroo. Not to be confused with drop bears. But yes, they live in trees, and yes, they are a type of kangaroo.

Want to spot wildlife in Queensland? Check out these tours:

You can’t help but crack a smile when you meet a quokka on Rottnest Island, outside Perth. These tiny wallabies evolved without predators, so they’re comfortable around humans, and regularly star in selfies.

Much more unique wildlife in Western Australia is best seen with your head below water. Which is hardly surprising, given the state’s long coastline.

Want to spot wildlife in Western Australia Check out these tours:

Wonders of the West Coast & Kimberley

When considering seeing animals up close and in the wild there are a few things to consider before you book your wildlife experience. In co-operation with our partner, World Animal Protection, and with guidance from the Five Domains of Animal Welfare, AAT Kings and The TreadRight Foundation as please to support a travel industry free of animal cruelty. You can read more about our Animal Welfare Policy and how we support wildlife here.

Just how much do you really know about wildlife in Australia?
ADDED TO BROCHURE

Just how much do you really know about wildlife in Australia?
ADDED TO BROCHURE