The Natural Wonders of Australia

When it comes to natural wonders, Australia’s cup really does runneth over.

The country is home to 20 UNESCO World Heritage Sites – from rainforests and fringing reefs to destinations telling Dreamtime stories and tales of early European settlement – and hundreds of national parks, dozens of marine sanctuaries, and a lengthy list of pristine parcels of property.

The Great Barrier Reef and Uluru are the most famous, but it would be a travel sin to limit sightseeing to the top two with every patch between the Pacific and Indian oceans home to Mother Nature’s most wonderous work.

Check out some of the natural wonders that can be found in each of our states and territories to help you plan your next trip.

The Apple Isle – the picturesque patch of Australia separated from the mainland by the deep blue of Bass Strait – is home to prized parcels of pristine wilderness, sky-scraping peaks that wear snowy white crowns during winter, and historic hideaways documenting the early days of Van Diemen’s Land more recent European discovery.

Freycinet National Park, on the state’s east coast, is a more recent addition to the list of Tasmania’s natural must-see sights with the pink granite peaks of the Hazards and the perfect white sand of Wineglass Bay complementing the empty emerald and sapphire coves that define the Freycinet Peninsula.

The Gordon River is the jewel of Tasmania’s west coast with the dark tannin-stained water, which drifts through the heart of the Tasmanian Wilderness World Heritage Area, becoming so still it is a mirror perfectly reflecting the towering trees growing along the banks.

AAT Kings’ Perfect Tasmania is a 13-day tour that completes a clockwise loop from Hobart to take in Cradle Mountain, the Gordon River and Freycinet National Park as well as visiting the Port Arthur Historic Site on the Tasman Peninsula, Russell Falls and the tranquil Tamar Valley. 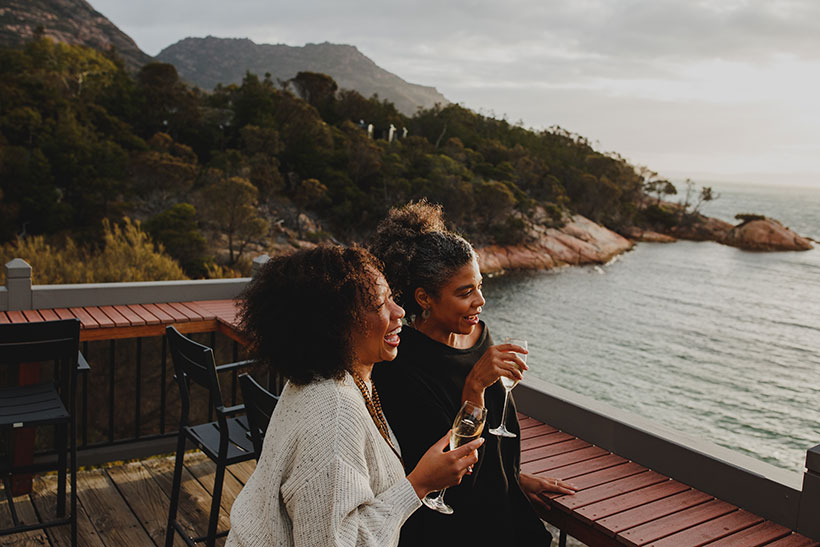 Victoria is a state that’s heavy with natural wonders, from the snow-capped peaks of the lofty Victorian Alps to the golden sand of the spectacular south coast.

The Great Ocean Road – that scenic stretch of asphalt that winds between surf-side Anglesea and bucolic Allansford – is famous far and wide thanks to icons like the 12 Apostles, Loch Ard Gorge and Bay of Islands with the Eagle Rock Marine Sanctuary and thundering Johanna Beach adding additional reasons to dwell.

But there are just as many places on the inland side of the road with hidden waterfalls, centuries-old forests and clear mountain streams hiding inside the Cape Otway National Park.

Follow the paths through Melba Gully after dark to see the colonies of glow worms, stroll Maits Rest Rainforest Walk to see ferns thriving in the valleys beneath the beech trees, and hike below the tall California redwoods hiding deep in the Otway Ranges.

The Grampians National Park is a few hours north and home to the most extensive collection of significant Aboriginal rock art paintings and shelters in southern Australia, with this rich Indigenous history and remarkable flora and fauna combining to earn the address heritage listing.

Tastes of Southern Australia is an 11 day tour beginning in Sydney which takes in bushranger country at Beechworth and Glenrowan, the flavours of Melbourne’s vibrant foodie scene before travelling along the Great Ocean Road, visiting the quaint seaside towns of Lorne and Apollo Bay. 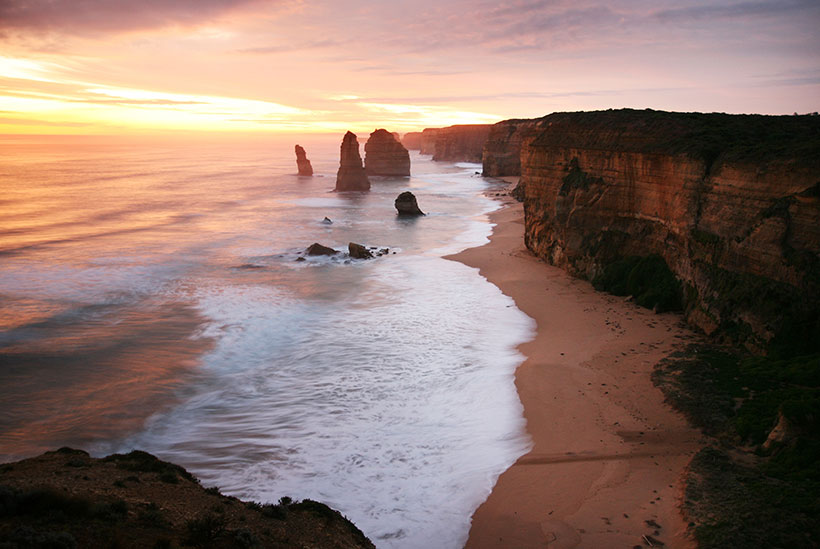 The Blue Mountains is the undisputed champion of New South Wales when it comes to ranking the state’s natural wonders, and it’s the view of the iconic Three Sisters from Echo Point – past the pinnacles to the rolling landscape covered in the camouflage green of eucalypts – that prizes this location the crown.

AAT Kings’ includes a day-trip visit to the Blue Mountains as part of a four-night stay in Sydney with the outing including a stop to savour Jamieson Valley sightseeing and time to ride the scenic railway, cableway or skyway to appreciate the scale of the steep valleys and rising summits.

The national capital is famous for human history – it did rise from sheep paddocks during the early decades of last century – but, sitting in the shadows of the Brindabella Range at the northern end of the Australian Alps, it also boasts some natural wonder.

Lake Burley Griffin rests at the heart of the perfectly-planned settlement, with some of the city’s most significant structures lining the banks, while the National Arboretum now nurtures more than 44,000 trees from 100 countries growing in 94 curated forests and landscaped gardens across the 250ha hillside site.

Southern Capitals: City Meets Bush is one AAT Kings’ outings that visits Canberra with this five-day crossing from Sydney to Melbourne spending a night in the Australian Capital Territory and including an ascent of Mt Ainsley to survey the settlement surrounded by mountains. 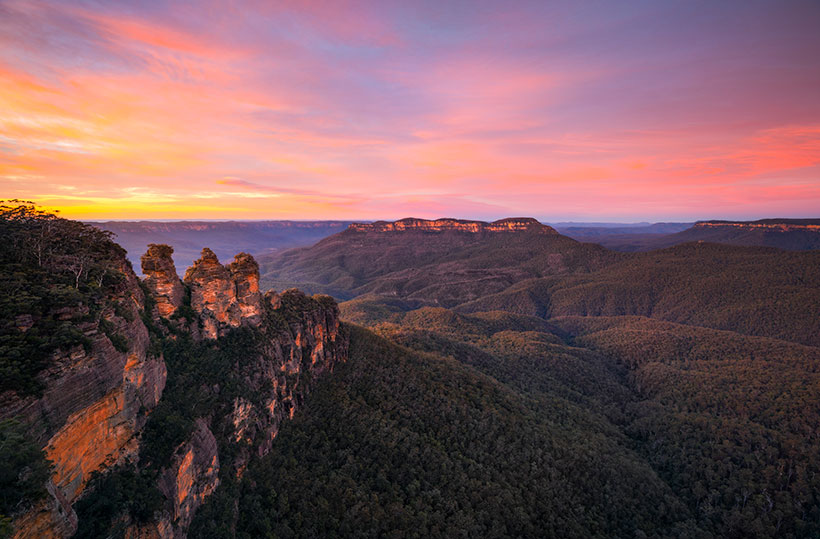 The Daintree Rainforest and Great Barrier Reef cement Queensland position high up on the list of locations to appreciate world-famous wonders but, while these two attractions should always be high up on every traveller’s bucket list, there’s so much more to the state’s tempting tropical north.

The Atherton Tablelands is the first stop on the drive west towards Gulf Country with the road “up the Gillies Range” one of Australia’s great scenic drives and the gem-like chain of crater lakes perfect for refreshing during steamy Far-North days.

Cobbold Gorge is one of Australia’s true hidden gems with this outback oasis, that hides in the Gulf Country to the south of Georgetown, a jigsaw of cool narrow canyons and rolling sandstone ridges.

Lawn Hill National Park sits to the south of the Gulf of Carpentaria’s southern shore and is another secret spot that lets intrepid travellers stand on remote soil. The Constance Range is an impressive sandstone escarpment, best seen at dawn and dusk when the fields of spinifex cast long shadows on the scorched rock, and Adel Gorge another sanctuary of lush green in kilometres of outback ochre.

AAT Kings’ adventurous Gulf Savanna Wanderer departs Cairns to spend nine days surveying the splendid scenery west of the Tropical North Queensland capital with a tour of the Undara Lava Tubes, a sunset Gulf of Carpentaria cruise, and journeys aboard the Gulflander and Savannahlander trains also on the schedule. 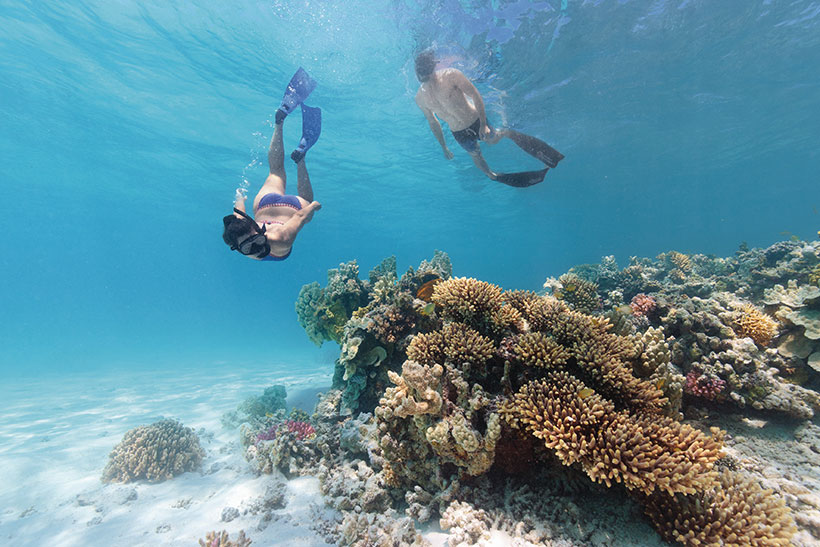 Australia’s Northern Territory can comfortably be divided into two sight-seeing segments – the Red Centre and Top End – with each boasting a wealth of natural wonders inside the 24 national parks and more than 70 nature reserves, conservation areas and marine sanctuaries.

Kakadu National Park is rugged but not remote – an easy drive from Darwin, with comfortable accommodation and impressive infrastructure – and caters to those set on seeing cascading waterfalls, lagoons alive with native flora and fauna, and the sun setting on a sunburnt escarpment.

Litchfield National Park is a local favourite, and possibly the Territory’s best-kept secret, with this parcel of protected land just an hour from Darwin offering the opportunity to float in rockpools and the ponds below tumbling waterfalls.

Nitmiluk National Park and the string of 13 sandstone canyons that make up Katherine Gorge are always listed with the Top End’s most celebrated natural wonders and best appreciated by foot, kayak, boat or helicopter.

While the colours continue to change during the day, and the hours around noon deposit dramatic shadows on the sheer canyon walls, the most tempting time to visit is during sunrise and sunset when the theatrical blue hues of dawn and dusk consume the landscape.

Further south in Australia’s arid red heart there are two stars of the natural wonders show with Uluru and Kata Tjuta demanding the spotlight but needing no introduction.

Kings Canyon is another Central Australian wonder that doesn’t get as much glory as its neighbours but definitely deserves attention, with the challenging 6km Rim Walk or shorter 2.6km Kings Creek tramp the best options for exploring.

Outback Safari is an AAT Kings’ itinerary that takes in the best of the Territory’s natural wonders with this 11-day expedition from Alice Springs to Darwin visiting Red Centre locations like Uluru, Kata Tjuta and Kings Canyon as well as Kakadu and Litchfield national parks, Katherine and Mataranka in the north. 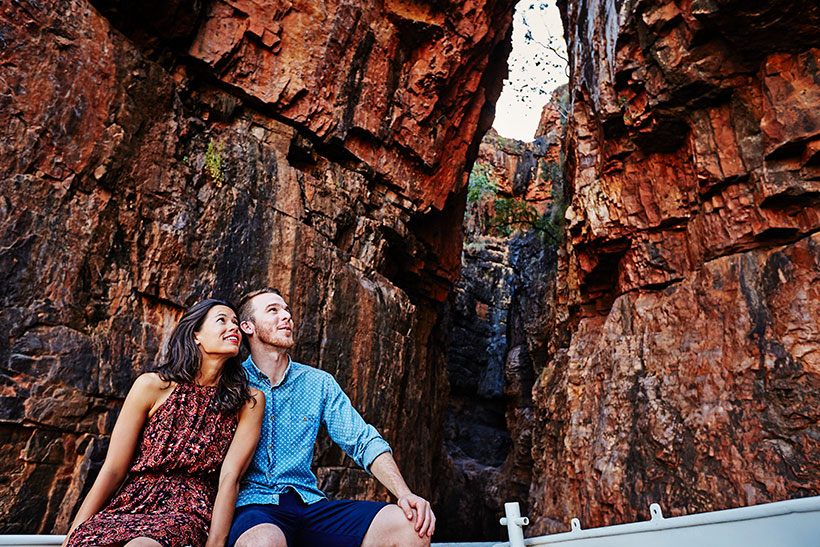 When it comes to rating natural wonders, South Australia doesn’t immediately spring to mind. But the state is punching above its weight with the Flinders Ranges, Kangaroo Island and the Fleurieu Peninsula three striking spots to appreciate Mother Nature’s very best work.

The Flinders Ranges – from Quorn in the south, through Blinman and Beltana in the heart of the region, to Arkaroola in the north – can only be described as magnificent and, just a five-hour drive from Adelaide, must be considered Australia’s most accessible area of authentic outback.

While Wilpena Pound is the focus for most visitors, with a stroll into the natural bowl an easy way to appreciate the scenery, it’s only one location to take in the geological grandeur of the snaking Elder and Alphabet ranges formed 600 million years ago during the Ediacaran Period.

Those set on surveying the glory of the Flinders Rangers should embark on AAT Kings’ Outback Explorer with the 10-day journey from Adelaide to Alice Springs continuing to the Red Centre after crossing the South Australian border.

The tour dashes across the state border on the second day of this week-long trip and navigates the rolling hills of the Fleurieu Peninsula before boarding the ferry to Kangaroo Island where a guided walk of the Seal Bay Conservation Park waits after seeing Admirals Arch and Remarkable Rocks. 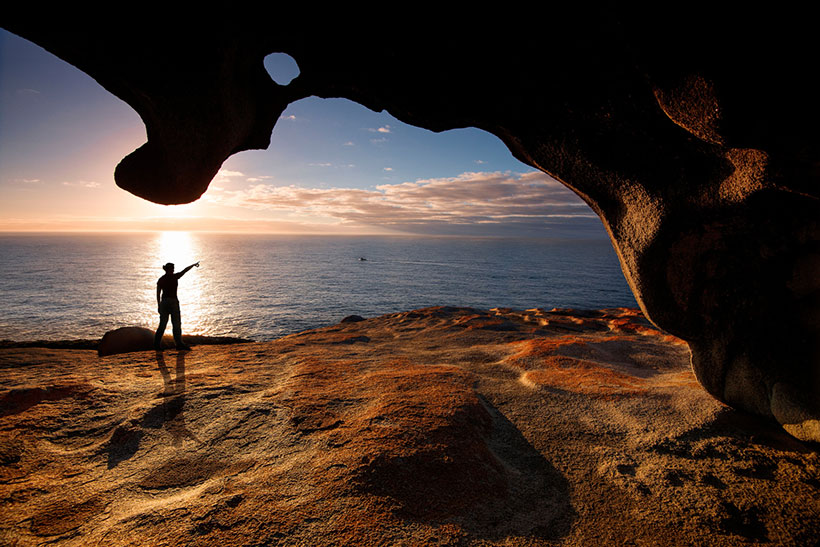