PLACES TO VISIT IN THE NT

IF Dorothea Mackellar's ode to Australia was used to describe a single destination, it could very well be the Northern Territory.

Australia's most sparsely populated province is six times bigger than Britain and the very definition of a sunburnt country and a land of sweeping plains. It is rugged mountain ranges, drought, flooding rains, far horizons, jewelled seas, and that hot gold hush of noon.

It is a land where adventure comes easy. From the tropical Top End coastline where the sparkling blue of the Arafura Sea touches the fine white Arnhem Land sand south to the serrated ochre ridges of the MacDonnell Ranges stretching across the heart of the Red Centre.

It’s an address abundant with colour. The deep purple that washes across Uluṟu during a rare thunderstorm, the electric pink covering Kata Tjuṯa when the low evening sun strikes the domes, the clear turquoise water of the thermal Mataranka ponds, the ghostly white of Hermannsburg’s eucalypts, the rusty ochre of the Kakadu escarpment, and the unimaginably deep blue of a cloudless outback sky.

And it is a place where the simple mention of a name – the white letters on a green road sign beside the Stuart Highway, script scrawled into a homemade plaque hanging above the entrance to an outback pub, the neat print of an influencers Instagram account – activate the imagination.

If the Top End and Red Centre are calling, 2022 is the time to answer. Read on to discover the top places to visit in the Northern Territory this year.

It's a cinch to spend hours inside this esteemed national park – wandering trails that wind through fields of desert wildflowers, watching indigenous artists at work in an art gallery, hearing a story of geology from a local ranger – and every visit should start and finish with the sun.

Sunrise and sunset are tempting times to see Australia's most famous landmark with a remarkable serenity settling on the landscape as the colours change with every blink of the eye and the low light casts long shadows from the spikey spinifex grass.

At dawn colour creeps across the countryside as the sun hauls itself into the sky to signal the start of another day, and the cool night air is replaced by the first whispers of dry heat, while in the evening the baked red is replaced by pastel hues that announce the imminent arrival of a celestial sea of stars.

These are daily Red Centre encounters that have been drawing visitors for decades, but the pandemic pause means those discovering Uluru in 2022 will find it easier to snag extra space inside one of the park's viewing areas.

AAT Kings offer Half-Day tours scheduled around the sun with the morning Uluru Sunrise & Kata Tjuta detouring to walk around the dramatic domes of the Red Centre's other famous address after discovering the dawn while Uluru Sunset with BBQ Dinner adds gourmet goodies and stargazing to an evening encounter. 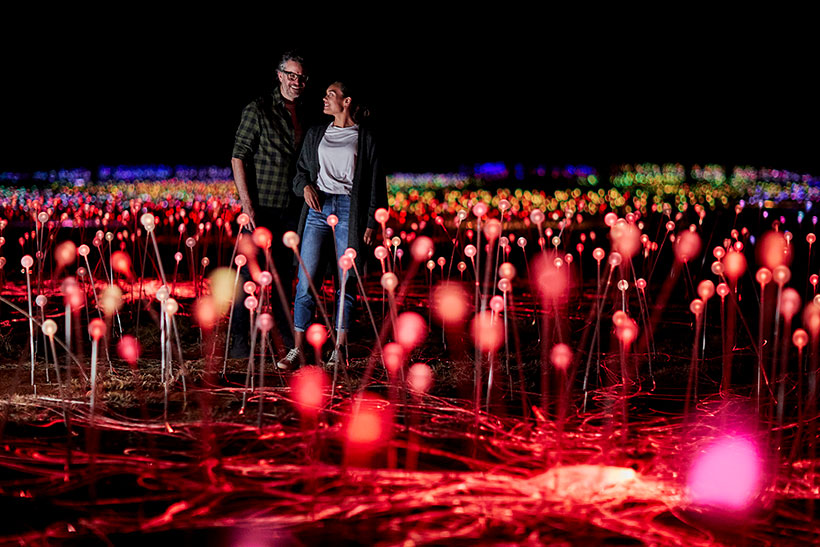 The Tiwi Islands – the fabled "islands of smiles" floating in the Timor Sea 90km north of the Territory's capital city – do not top the to-do lists of many travellers, but Bathurst and Melville islands offer a rare opportunity to experience a unique slice of Top End life.

The team at AAT Kings say travellers haven't really seen Australia until experiencing the Tiwi Islands with the company – which has been taking holidaymakers to the hidden corners of this country for more than 100 years – offering a day tour from Darwin that shines a sustainable spotlight on the people and their proud culture.

The Tiwi Islands Aboriginal Culture Tour promises to "reveal scenes seldom seen by many outsiders" and starts with a smoking ceremony before calling into the "progressive modern community" of Wurrumiyanga with a local guide and a stop to see island artists at work. 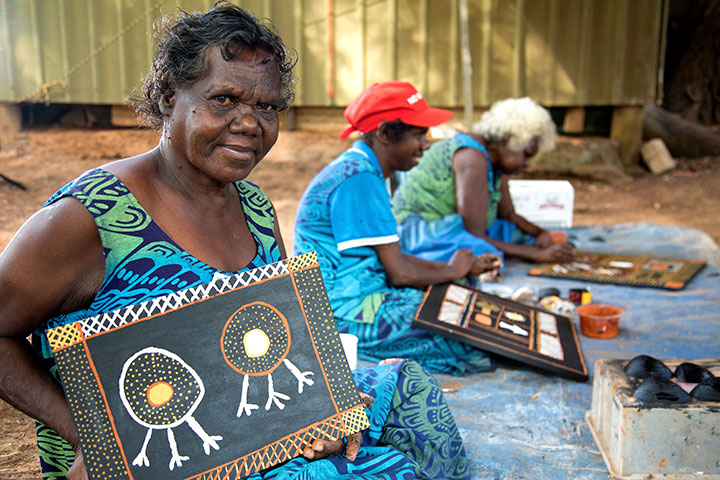 Kakadu National Park – the World Heritage Site with dual-listings described as "a living cultural landscape with exceptional natural and cultural values" by the folks at UNESCO – is responsible for drawing generations of travellers to Australia's dreamy Top End.

Kakadu also boasts an impressive assortment of colourful flora and fascinating fauna, with the fact it's now considered to be "one of the least impacted areas of the northern part of the Australian content" just one reason for the dual UNESCO designation.

It is rugged but not remote, covering almost 20,000sq/km of the vibrant landscape a three-hour drive from Darwin, and home to more than 5,000 Aboriginal rock art sites with the local Bininj/Mungguy people calling this country home for more than 65,000 years.

Kakadu National Park Explorer is a carefully curated AAT Kings Day Tour that helps discover this dynamic destination and includes a cruise on the Yellow Water billabong to spy parading waterbirds and loitering crocodiles, a walk around Burrunggui/Nourlangie Rock to marvel at the indigenous art, and a visit to the Warradjan Cultural Centre. 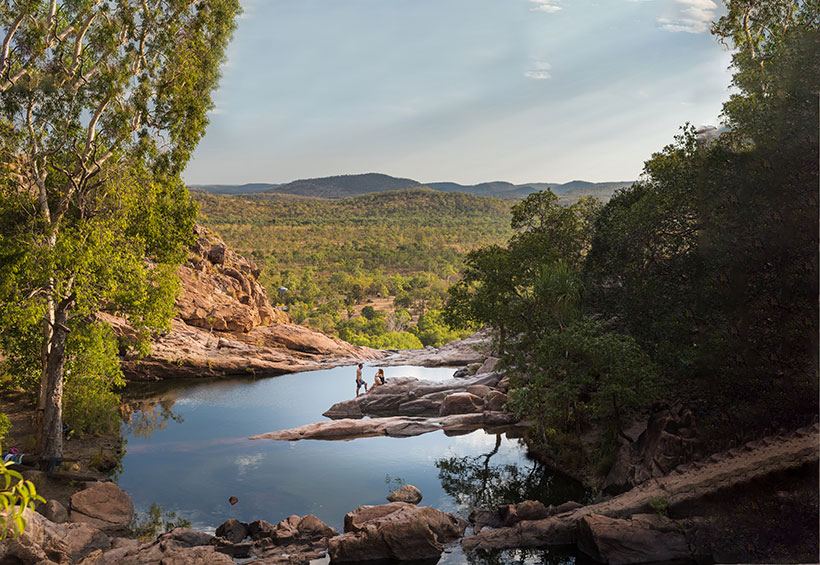 Kakadu gets all the glory, but Litchfield National Park is tops with Territorians who retreat to this protected parcel of land a 60-minute drive south from Darwin when the weather is warm and the waterfall ponds promise pretty places to cool down.

Litchfield is one of the Northern Territory's true hidden gems and best described as a "water wonderland" with visitors invited to float in plunge pools hiding at the base of steep spring-fed waterfalls like Florence Falls and Wangi Falls or soak in the gentle tiered pools at Buley Rockhole.

Swimming isn't allowed at Tolmer Falls but it's still worth seeing with this landmark, which sits close to the park's western edge, boasting a 1.6km walking trail that winds through sandstone country to pass pristine rock pools and the tributaries of Tolmer Creek.

Litchfield National Park Waterfalls is a hosted AAT Kings Day Tour venturing deep into the heart of the Tabletop Range to the west of Bachelor and includes a guided wander through the monsoonal vine forests, a stop to see the tall magnetic termite mounds that stand like sentries around the plateau, and cooling soak at Wangi Falls. 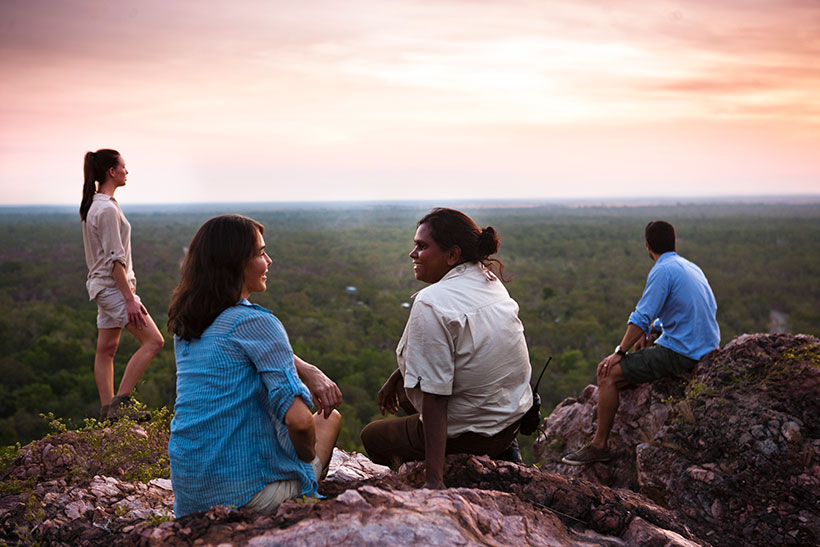 The Red Centre's most significant settlement – Alice Springs is home to more than 25,000 people living along the streets stretching from the Todd River's typically dry riverbed – is nicknamed the "headquarters of the outback" and a vacation destination offering myriad opportunities for exploration and adventure.

Start the day by floating over the seared landscape in a hot-air balloon and finish with a sunset camel safari while in between there's the chance to wander art galleries, walk a section of the Larapinta Trail, tour the Royal Flying Doctor Service base, visit The Kangaroo Sanctuary, stroll the Olive Pink Botanic Garden, and admire the view from Anzac Hill.

AAT Kings makes exploring easy with A Town Like Alice a Half-Day tour that includes stops at the School of the Air and RFDS headquarters while also promising animal encounters at the Alice Springs Reptile Centre and time to discover the early days of European settlement at the historic Telegraph Station. 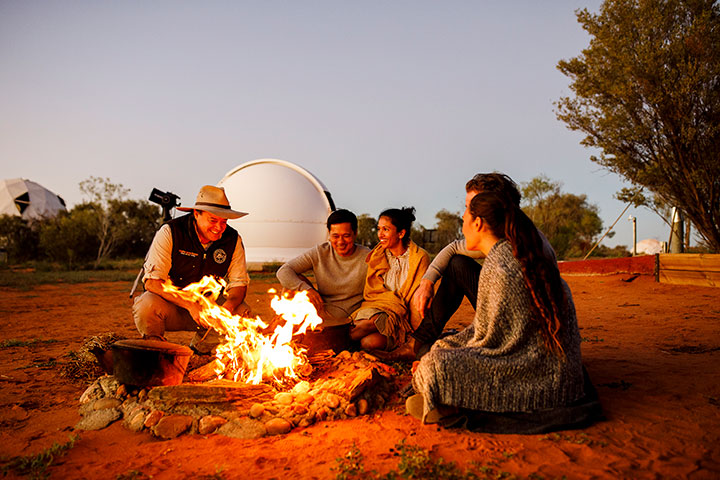 Watarrka National Park – home to the legendary Kings Canyon – is a three-hour drive from Uluru. The leisurely journey provides the distance for the parched desert and sun-baked rocks around Yulara to be replaced by steep sandstone walls and crevices packed with sprawling palm trees.

A visit to the sanctuary sitting at the western end of the George Gill Range must include walking and a climb to the canyon's rim will be rewarded with a view of the complex of sun-baked rocks that are reminiscent of an ancient settlement's ruins and now known as the Lost City.

Those seeking something with a little more shade can stroll through the valley below, where permanent spring-fed waterholes are surrounded by the lush cycad palms and thriving eucalypts that create a peaceful oasis in this arid Central Australian wilderness.

If Watarrka National Park is calling, AAT Kings offers the Kings Canyon Scenic Climb. This half-day tour departing Kings Canyon Resort extends the opportunity to complete the three-hour circuit of the valley or a more leisurely amble across the gorge floor that’s hosted by the excursion's experienced driver/guide. 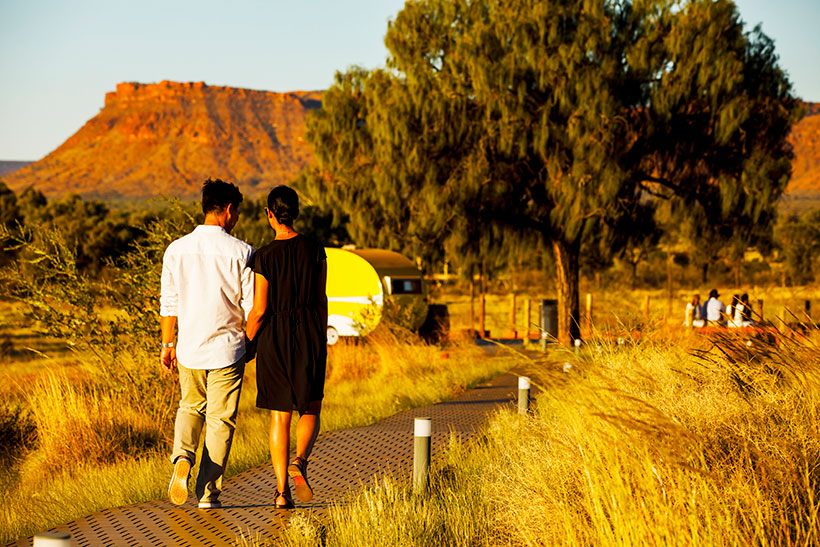 PLACES TO VISIT IN THE NT
ADDED TO BROCHURE

PLACES TO VISIT IN THE NT
ADDED TO BROCHURE