Things To Do In Cradle Mountain

TOP THINGS TO DO IN CRADLE MOUNTAIN

AUSTRIAN-born botanist Gustav Weindorfer settled on a day early in 1909 to make his first ascent of Cradle Mountain.

He'd been gazing at the distinctive peak for almost three years, spotting the ridge after arriving on the Apple Isle with his Aussie bride Kate Cowle in 1906, but waited until the couple settled on a farm near Devonport before embarking on the hike.

Gustav was not easily impressed – hailing from Austria, he'd grown up in the shadows of the majestic European Alps – but the jagged pinnacles captured his attention and captivated his imagination.

He waited 12 months to return, taking his naturalist-wife Kate along on that expedition, and was so spellbound with the summit and surrounding scenery he declared the landmark "must be a national park for all the time" because it was so magnificent the “people must know about it and enjoy it”.

More than a century later, in May 2022, Cradle Mountain-Lake St Clair National Park celebrated 100 years as a protected area with Gustav's 1920 declaration the call to action that launched the conservation process.

The location has become one of the island state's most tempting tourist attractions, drawing around 280,000 visitors annually in the two years immediately before the pandemic.

But before you start planning a trip to walk in Gustav's steps, read on to uncover more about this gem in Tasmania's crown and uncover the secrets to exploring the rugged region that serves as a gateway to the Tasmanian Wilderness World Heritage Area.

WHERE IS CRADLE MOUNTAIN?

Today the national park is one of the five protected parcels that make up the Tasmanian Wilderness World Heritage area – the UNESCO site spans thousands of hectares that make up the state's southern and western quarters – with this topographical treasure occupying 1600sq/km.

The nearest town is Moina, just 25km away, but most visitors arrive from further afield while completing a relaxed road trip around Australia's spectacular southern state.

The destination is 150km from Launceston, with the trip by road taking two hours, while drivers need a touch over four hours to finish the journey from Hobart 330km away in the state's south-east corner.

Shuttle buses complete the crossing between the national park visitor centre and Dove Lake – with operating times set according to the seasons – as private vehicles are not allowed on the roads during business hours, with tickets included in the entry pass. 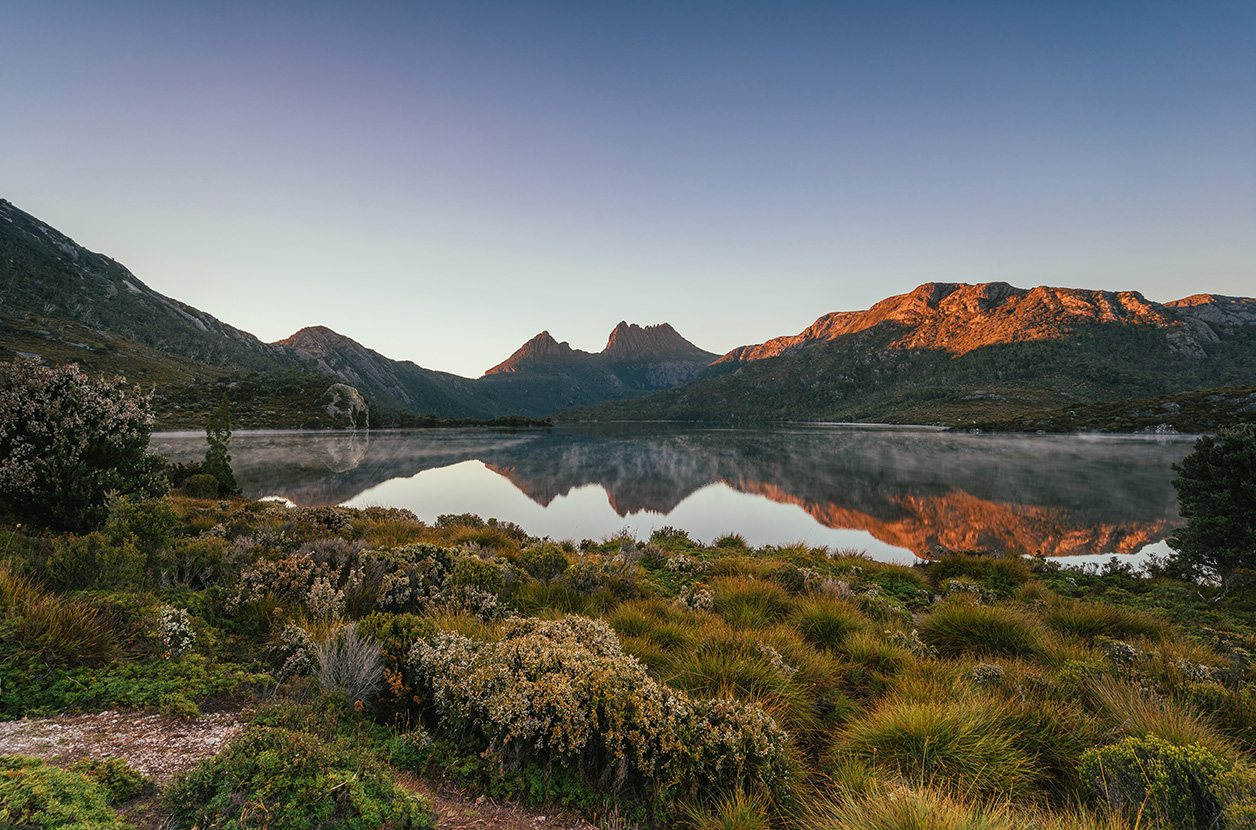 WHY SHOULD I VISIT CRADLE MOUNTAIN?

If savouring the spectacle of one mighty mountain isn't enough, we can suggest a few other reasons to make the journey into Tasmania's tempting Central Highlands.

The Tasmania Parks & Wildlife Service describes the national park as "a place of exceptional beauty in the heart of the Tasmanian Wilderness World Heritage Area" that is "synonymous with nature, wilderness and all things pristine".

"From moss-covered ancient rainforests and deep river gorges to snow-covered mountain peaks, wild alpine moorlands and glacial lakes, the park is revered for its diverse and breathtaking landscapes," the Parks & Wildlife Service notes.

There's an abundance of native Australian wildlife to be spotted – Tasmanian devils, quolls, platypus, echidna and wombats – and the scenery is spectacular with the sapphire lakes and jagged valleys carved across the millennia by the slow creep of prehistoric glaciers.

CAN I DO CRADLE MOUNTAIN IN A DAY?

It can be done – driving around the Apple Isle can never be considered demanding – and those dreaming of a single-day detour to Cradle Mountain are most likely to drop by while based in Launceston, Devonport or Burnie.

But those dedicating just a few daylight hours to exploring the dramatic destination will do little more than scratch the surface by taking in views from roadside vantage points, with the region's most tempting walking trails requiring at least a couple of hours to complete.

A single-day schedule should include a wander along Weindorfer's Forest Walk to discover more about Gustav and Kate, and their considerable contribution to the area's conservation, and stroll the edge of Dove Lake to take in those panoramic Cradle Mountain vistas.

A better plan is to plot a two-night stay to allow a full day of exploring, then marvel at the legendary landscape between dawn and dusk before sitting under a clear night sky with stars undiluted by light pollution. 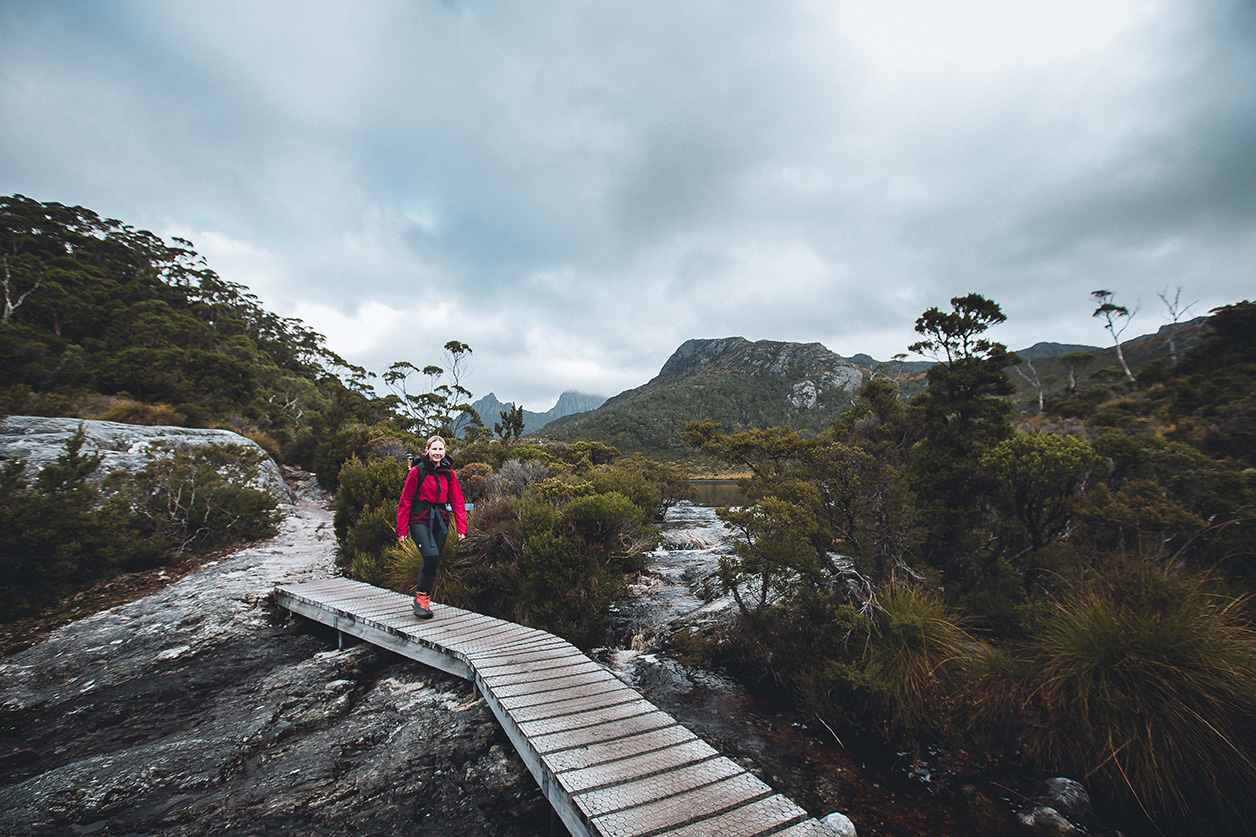 Cradle Mountain has been a haven for hikers since Kate accompanied Gustav on the 1920 tramp across the trackless terrain between their Kindred farm and the imposing crown of the state's fifth-highest summit.

And, just for the record, Kate did it wearing a long skirt and bone-necked blouse to be credited as the first non-Indigenous woman to make the trek to the top.

Today there are kilometres of maintained trails winding around the national park, from the esteemed Overland Track – the 80km route through Tasmania's alpine heart that takes between five and six days for confident hikers to complete – to shorter strolls done sans hiking boots or backpacks.

The climb to the Cradle Mountain summit is a walk that tops many a Tasmanian travel to-do list, but this 12km round-trip adventure is a challenging eight-hour loop that should only be attempted by those with solid hiking credentials and on a day promising calm weather conditions.

The other path suited to those open to a climb – and contented clambering across short but steep hillside sections – is the Crater Lake Circuit. This 6km trail requires two solid hours to finish and skirts Lake Lilla before ascending to a deep cirque pond hidden high in the ridgeline and returning past Wombat Pool.

Less strenuous, but no less spectacular, is the slightly easier 6km Dove Lake Loop Circuit. It edges around the water feature at the mountain's base to take in the old boatshed and Ballroom Forest while delivering vistas across the landscape to the region's world-famous landmark.

BUT THERE'S MORE TO DO THAN TRAMP

While walking and wandering top the average traveller's wish list, other activities are on offer.

Canyoning and canoeing are summertime exploits, fly-fishing is seasonal, horseback riding and mountain biking tours depart when the climate is comfortable, and boat tours tempt those venturing to Lake St Clair on the park's southern side.

Those seeking less-active pursuits can spend a few hours in a day spa, enjoy a bottle of Tasmanian wine matched with a platter of local cheese at a tranquil eatery, or take to the sky on a helicopter sightseeing flight. 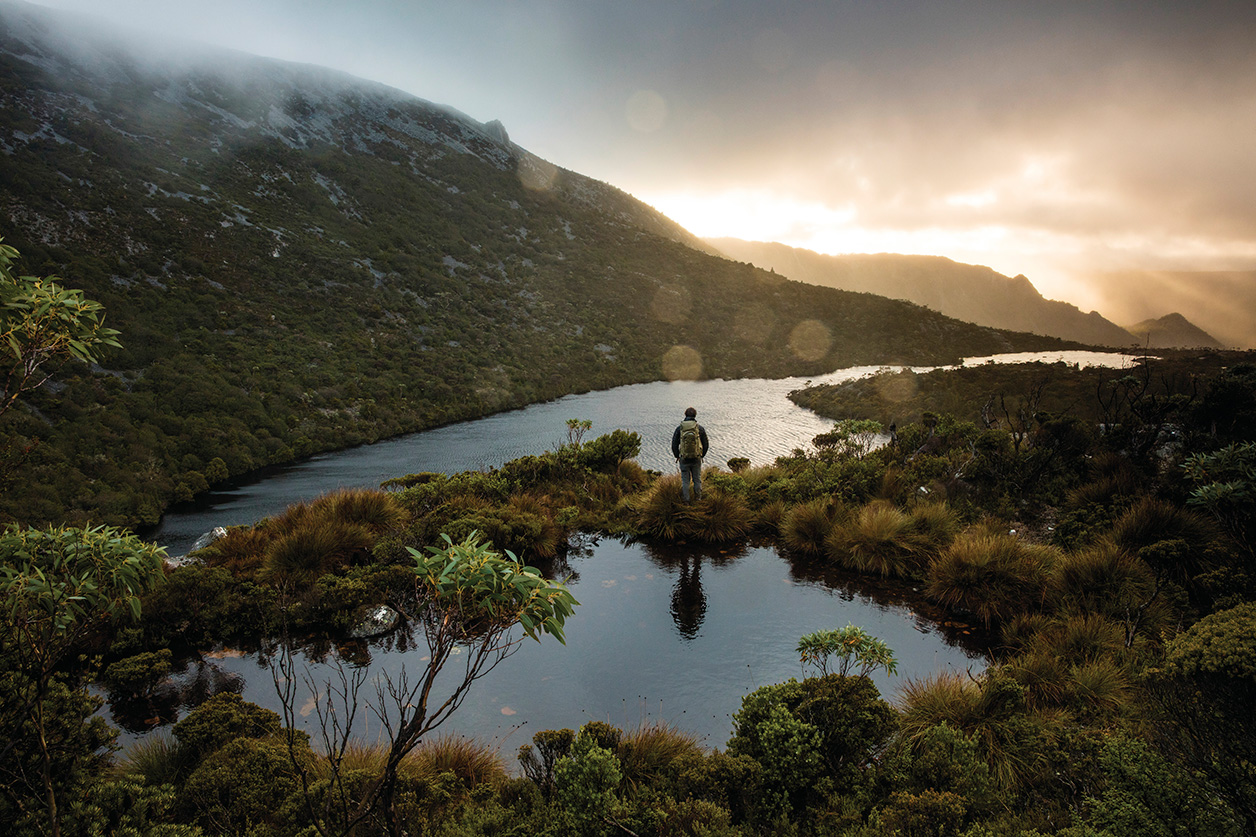 Tasmania is one of the best places in the country to see a wombat in the wild and, while this activity can't be scheduled, most visitors will spot one of Mother Nature's furry bulldozers while strolling the trails stretching through the national park.

Locals say the chances of stumbling across a wombat increase around dawn and dusk, with the moorland closer to Cradle Mountain a favourite habitat, while echidnas and both the eastern and spotted-tail quoll can often be found fossicking and foraging for food.

Cradle Mountain and Lake St Clair are both listed as preferred precincts for the Tasmanian tiger, and travellers might fluke a fleeting glance while inside the boundaries of this protected block.

But those set on seeing this iconic creature during an Apple Isle sojourn should swing past Devils @ Cradle. The wildlife sanctuary, just 500m from the national park's entrance, features a vast natural enclosure for daytime encounters and after-dark tours that let visitors observe the tigers going about their nocturnal activities.

A HOLIDAY FOR ALL SEASONS

Cradle Mountain-Lake St Clair National Park is a destination for all seasons – just like the Apple Isle itself – with only inadequate wardrobe preparation likely to spoil a stay in all but the very worst weather.

Clear skies and comfortable temperatures ideal for exploring the alpine terrain define summer, Dove Lake is wrapped in glorious golden hues during autumn, delicate wildflowers carpet the alpine moors surrounding the glacier ponds during spring, and winter delivers the snow that turns the destination into a white wonderland.

The average maximum temperature hovers around 18C during summer, with the mercury not climbing much past 6C during the year's coolest months, and while snow is expected from late autumn to early spring it's not uncommon to see flurries floating across the fields in the weeks closest to Christmas. 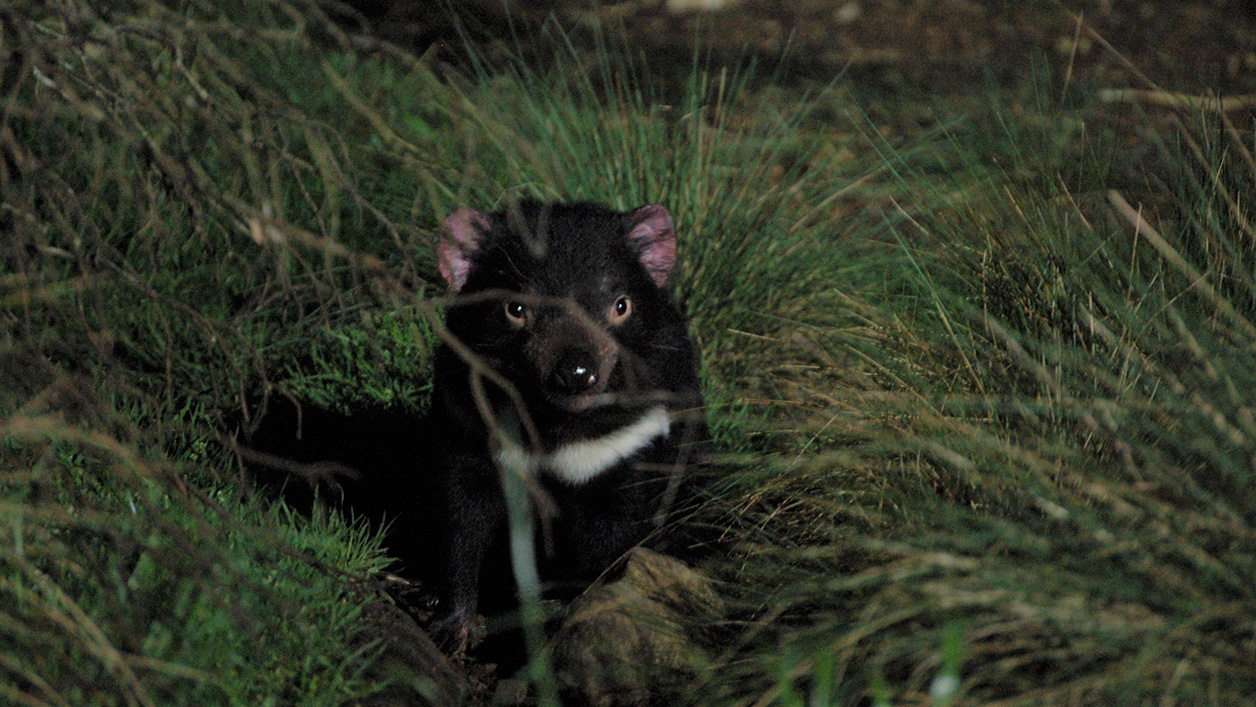 Tasmania is the perfect place to indulge in summertime play, with the island enjoying between 13 and 15 hours of daylight during the sunniest season.

The longer hours between sunrise and sunset during December, January and February guarantee time to complete one of Cradle Mountain's longer hikes, while lingering along the way to savour the scenery. And while the alpine lakes will never be warm, this is the time of the year to brave a refreshing dip.

But while the weather is chilly, and the days short, the landscape turns a whimsical wintery white with an abundance of open fires to snuggle beside in the cosy cafes, relaxed restaurants and delightful day spas dotted around the district.

Waldheim Alpine Spa sits in the heart of the wilderness area, with wide floor-to-ceiling windows framing the sometimes-foggy views across the bush, and Tavern Bar is not only warm and welcoming but serves the best pizza to those set on sipping a Tasmanian red while lounging by the fire. 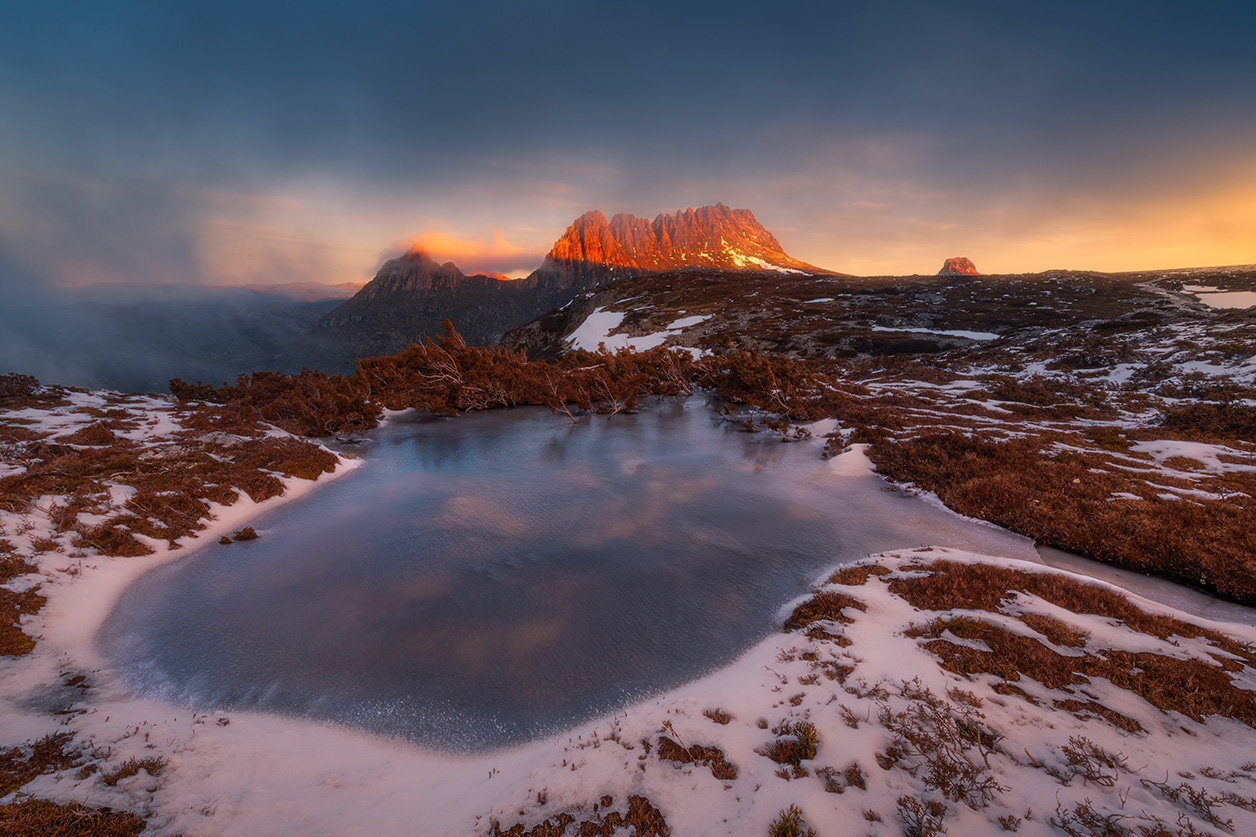 Cradle Mountain is a star of the schedule on most AAT Kings’ Apple Isle tours, with most itineraries winding through the Tasmanian Wilderness World Heritage Area to discover the destination's most famous mountain.

Perfect Tasmania is the ultimate expedition across Australia's most southerly state. This 13-day loop starts and finishes in Hobart and pauses at Cradle Mountain for two nights to let travellers linger long enough to appreciate the diversity of the dramatic alpine landscapes.

And both itineraries let AAT Kings' travellers connect with Gustav and Kate by visiting Waldheim Chalet, the lodge the couple built to entice visitors to Cradle Mountain and start the journey towards conservation inspired by the couple's 1910 climb.

Things To Do In Cradle Mountain
ADDED TO BROCHURE

Things To Do In Cradle Mountain
ADDED TO BROCHURE