Endangered Species in the Great Barrier Reef & How To See Them

The World Heritage-listed Great Barrier Reef is the largest coral reef system in the world, boasting one-third of the earth’s coral population and the greatest marine biodiversity of anywhere on the planet.

Located in the North-East of Australia, it’s the mecca of diving locations, home to an intricate natural tapestry and vibrant underwater world that’s teeming with unique marine life and unbelievable sights. 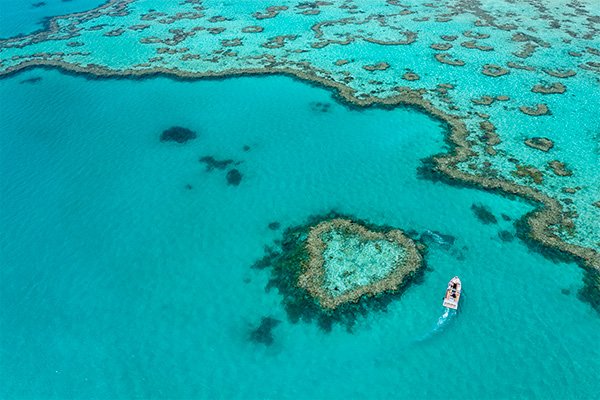 Unfortunately, global warming and rampant pollution has left much of the Great Barrier Reef endangered. According to a new study, massive amounts of coral was “cooked” during the 2016 marine heatwave.

This bleaching event affected two-thirds of the reef, drastically transformed its makeup and removed important habitats for fish and other marine animals – effectively moving them one step closer to extinction.

List of endangered animals in the Great Barrier Reef

The Reef has changed forever, we need to make the most of what’s left and both celebrate and protect these critically endangered species. Below, we’ll list the animals that have been classified as endangered via CITES (the Convention on International Trade in Endangered Species of Wild Fauna and Flora).

There are six different species of turtles that reside at the Great Barrier Reef and, unfortunately, four are classified as endangered with the two other species close to being endangered.

These placid beauties have inhabited the oceans for more than 150 million years, yet now face extinction. The reason for the turtle’s endangerment is twofold: plastic bags – which the turtles mistake for jellyfish and eat, causing them to suffer a slow and painful death – and hunting. Turtles have been hunted for centuries due to the value of their shell, eggs and meat.

The four endangered turtle species are:

Loggerhead Turtle. This species also has a relatively slow reproductive rate, only breeding every two to five years, which has contributed to their endangerment.

Green Turtle. Climate change has caused frequent flooding of their nests and resulted in the dwindling of nesting numbers.

Hawksbill Turtle. It’s specifically the Hawksbill turtle’s eggs which make them seriously endangered, the eggs are still considered a delicacy and eaten in many parts of the world.

Leatherback Turtle. This species is critically endangered and is barely sighted in the Great Barrier Reef. The turtle is a target for many other predators and scientists natural selection is the main cause for their disappearance

How to see turtles:

If you want to get a glimpse at these majestic marine wonders, head to Mission Beach in Queensland or any of the small islands surrounding the Great Barrier Reef. These island shores are home to many nesting turtles, you will likely spot a female crawling from the ocean to her nest in the sand to deposit her eggs.

Turtles can also be spotted swimming around the Clump Point Jetty, on both low and high tide, along with sting rays and other marine life. 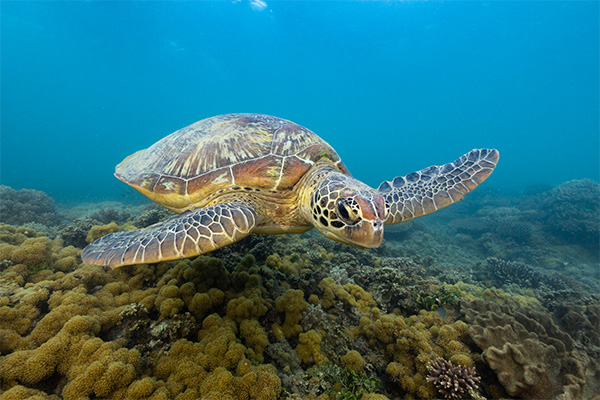 Whales, or Mugga Mugga as the Aboriginal Australians say, are like the custodians of the Reef. These big and beguiling mammals glide effortlessly through the water, keeping a watchful eye over their fellow sea creatures.

Thankfully, we’ve made some progress, all whales within Australian waters are now protected and there are limits on how close vessels can get to these beautiful beasts.

How to see whales:

If you’re keen to get up close and personal with a whale, records show that around 200 or so come to the Great Barrier Reef each year. They’re social creatures, more than happy to interact with divers and snorkelers, so grab your flippers and dive in! 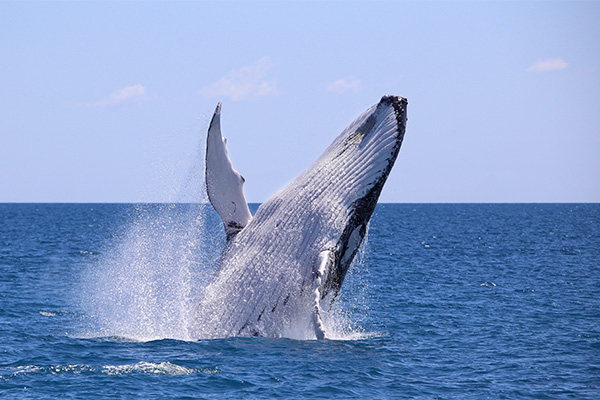 There are currently only around 200,000 to 300,000 Saltwater Crocodiles left in the whole world, making them one of the most endangered species in the Reef.

Saltwater Crocodiles, or ‘salties’ for short, are hunted for their sought-after skin, eggs and meat which is the main reason for their endangerment. They’ve also suffered drastic habitat destruction due to dredging which has contributed to their dwindling numbers.

How to see crocodiles:

Salties are excellent swimmers which mean they are found far out in the Barrier Sea, unlikely to be seen by tourists, which is kind of lucky considering they’re one of the most dangerous animals in Australia. 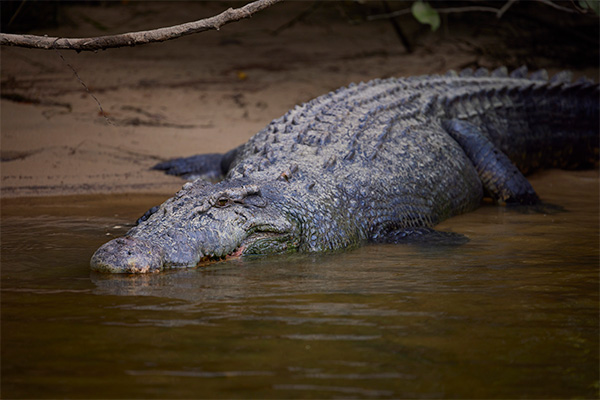 The dugong, sometimes referred to as the elephant of the sea, is one of the most endangered animals in the Great Barrier Reef, Australia and the whole world. It’s estimated that there’s only 10,000 of these gentle giants left in the wild.

Poaching, pollution, dredging and coastal development are all responsible for the dugong’s devastatingly low numbers.

Moreover, dugongs can only give birth to one kin and that newborn must be attached to its mother for at least 18 months. This long and difficult reproductive process stagnates the growth of the dugong population to a mere five percent each year.

How to see dugongs:

Dugongs mainly reside in the Mission Beach region around Hinchinbrook Island but can be spotted up and down the coastal areas of the Great Barrier Reef where there’s minimal waves and thick seagrass.

While coral might look like a plant, it’s actually an animal as it does not produce its own food. Out of the 360 species of coral found in the Great Barrier Reef, 22 types are currently endangered.

The severe coral bleaching which has occurred damaged approximately 1,500 km of the reef’s coral. While the reef might be the reason for the area’s name, it’s dwindling, fast.

How to see coral:

The Great Barrier Reef is one of the world’s most accessible reefs and its waters suit all degrees of diving/snorkelling competency. Whether you want to swim solo or take an advanced dive with a group, the underwater world is yours to explore 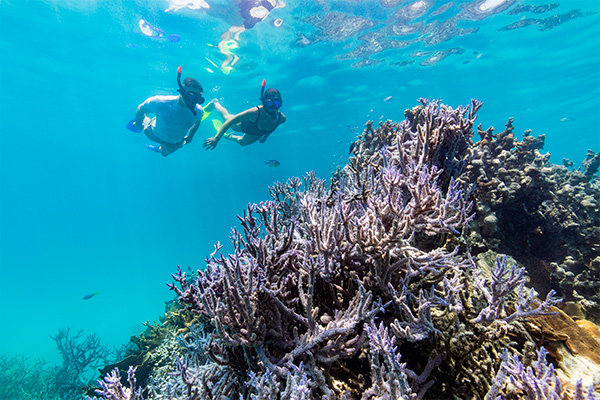 Other endangered species in the Great Barrier Reef

Other endangered species in the Great Barrier Reef include several types of fish such barramundi cod, Maori Wrasse, Queensland grouper and pipefish. These fish have become endangered due to a multitude of reasons including:

However, it’s not just smaller fish that are endangered. Some larger animals, such as sharks, dolphins and sawfish, are also experiencing declining population numbers. Although these animals may be larger, they are still vulnerable to human threats such as:

The growing list of endangered animals in the Great Barrier Reef serves to highlight the greater need for awareness and respect for these animals’ natural habitats when visiting the area. 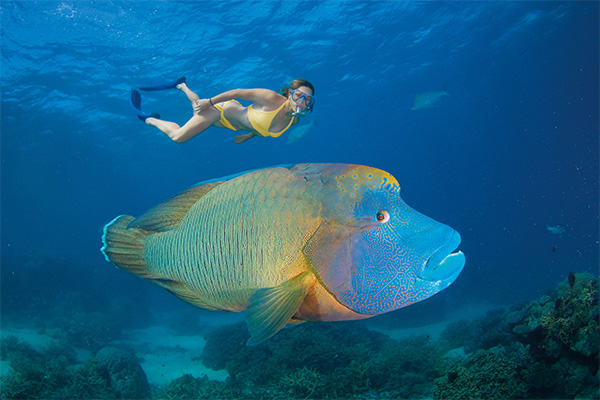 AAT Kings offers a variety of holidays that visit the Great Barrier Reef and beyond. We include itineraries that respect the wildlife and surrounding beautiful ecosystem.

Tropical Islands and Rainforest takes you on a 9-day journey from the Gold Coast to Cairns/Gimuy where you’ll see a parade of post-card worthy attractions, sun-soaked beaches and some of the world’s oldest tropical rainforests.

Explore three world heritage sites - K’gari (Fraser Island), Great Barrier Reef and Barron Gorge National Park, on our East Coast Beaches and Reef, a9-dayguided holiday from Cairns/Gimuy to Sydney/Warrane. This tour also includes our ‘10 Pieces’ program, which encourages guests to pick up 10 pieces of rubbish during their travels. Every little bit helps to protect this fragile part of the world.

Just a stones throw away is the ancient Daintree Rainforest/Kaba Kada, which can be explored on Down Under Tours’ Cape Tribulation, Daintree & Mossman tour. On this tour you’ll also visit Mossman Gorge, which is hidden within the rainforest and boasts pristine waters, making it the perfect spot to pause and take in.