Aboriginal and Torres Strait Islanders, belonging to hundreds of tribal groups, living right across the country from the southern tip of Tasmania to the crimson Kimberley coast, have always gathered to mark moments of peace, prosperity and importance.

There were festivals that helped prepare for battle, solidified songlines and shared stories, planned for a successful hunt, celebrated the arrival of visitors, and welcomed younger members of the tribe to adulthood.

And while many of the more traditional ceremonies are no longer part of everyday life, Indigenous Australia still celebrates what makes it unique during events that shine a spotlight on their significant tribal history and culture.

These modern celebrations last from a few hours to a few days and allow those attending to connect past, present and future in a quest for reunification and reconciliation. It is these moments that let those with an indigenous link to this land unite with family, community and country while providing the cultures that came to this place later a taste of traditions that now stretch back more than 50,000 years.

It's national multi-day celebrations like NAIDOC week, famous festivals like Darwin Aboriginal Art Fair and Taste of Kakadu, and community gatherings in remote corners like The Winds of Zenadth Cultural Festival on Thursday Island and the Kimberley's Mowanjum Festival.

If you're intrigued about all things Indigenous and want to incorporate a First Peoples festival into your next Aussie adventure, check out this list of Australia's Aboriginal and Torres Strait Islander events and experiences. 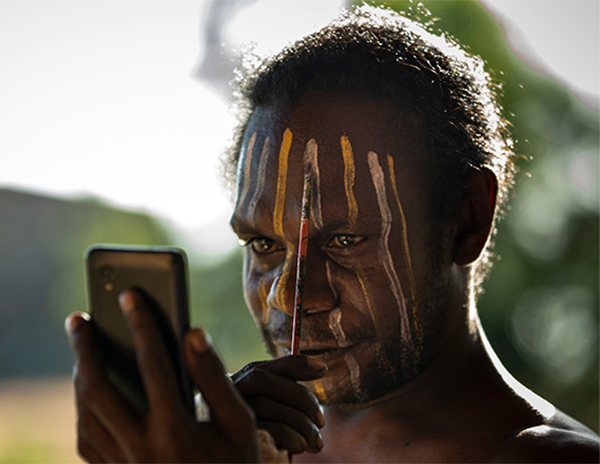 Aboriginal culture is strong in the New South Wales capital and travellers can connect with Australia's original residents during a visit to the country's biggest city by joining a tour hosted by an Indigenous guide or visiting an art gallery.

There are hundreds of Aboriginal sites around Ku-ring-gai Chase National Park, Coo-ee Aboriginal Art Gallery  is celebrated as the oldest continuing Aboriginal art gallery, and Sydney is home to Bangarra Dance Theatre.

Ceramicist Peter Cooley created Blak Markets  as a platform for Aboriginal businesses to showcase their wares, and the quarterly event not only exhibits First Nations arts and crafts but hosts everything from cultural performances and healing workshops to cooking displays and storytelling sessions. 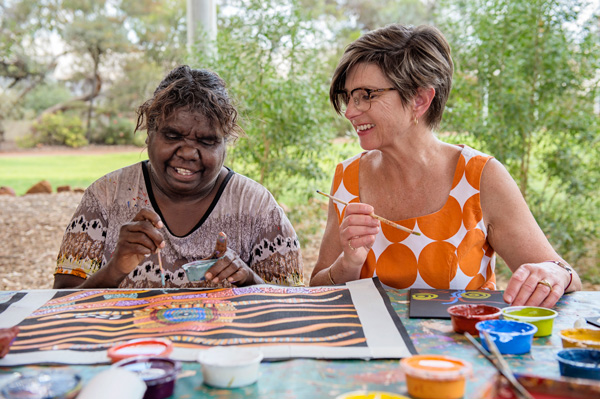 The Victorian capital claims a close-knit community of First Nations people, with the cosmopolitan city an informative place to connect with Aboriginal customs.

The Koorie Heritage Trust  and the Bunjilaka Aboriginal Cultural Centre  are both modern museums dedicated to telling the stories of the Wurundjeri, Boonwurrung, Wathaurrung, Daungwurrung and Dja DjaWrung people which are all part of Victoria's Kulin Nation.

The city recognises Aboriginal history and culture during NAIDOC week with a calendar of celebrations dotted across the beginning of July that includes a school holiday program at Melbourne Museum, The Finders Keepers Market, and a family day at Federation Square.

But First Nations occasions aren't limited to Australia's two biggest cities, with locations across the country's northern half also boasting diary dates worth planning travel around. Here are just five of our favourites.

The calendar in Far North Queensland is packed with Aboriginal events, from the Gimuy Fish Festival which takes over Fogarty Park in Cairns during August to the Yarrabah Music & Cultural Festival pencilled in for a 2023 return.

But perhaps the most celebrated is CIAF, with this five-day exhibition acclaimed as Australia's leading Indigenous art fair bringing collectors and curators to see work produced by the region's established artists and emerging talents.

There are dozens of activities during the festival, from fashion parades to concerts and artist conversations to workshops, with the Art Fair and Art Market occupying the renovated Cairns Convention Centre to exhibit the creations of artists living between Cairns and the Cape.

2. A TASTE OF BROOME

The Kimberley isn't short on First Nation events – from Derby's Mowanjum Festival  to the Kullarri NAIDOC Festival  – but it's A Taste of Broome that draws visitors set on discovering Aboriginal history and culture to the Kimberley.

The festival is described as "a reckoning for the senses, food, dance, tradition, culture, music, film and an atmosphere comparable to none" with this year's diary already featuring the Kimberley Cooking Experience and Broome Short Films both on August 27.

AAT Kings connection – Untamed Kimberley is an adventure for travellers set on seeing more of Broome with this 11-day itinerary departing Darwin and visiting Nitmiluk/Katherine Gorge, Kununurra, Ord River, the Bungle Bungles and Fitzroy Crossing before finishing in the west-coast town.

Those vacationers set on spending days in Broome at the start of their outing are also in luck, with the reverse journey, Wonders of the Kimberley, covering the same country but in reverse. 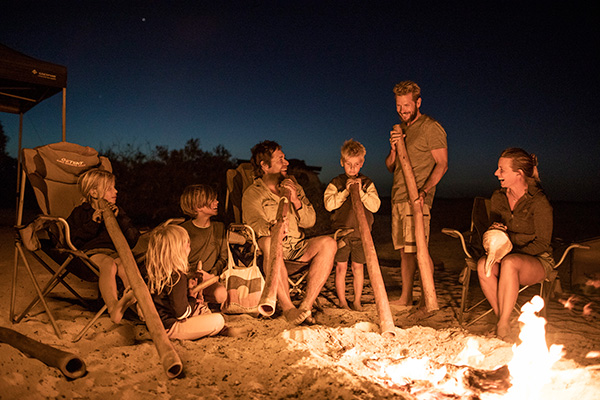 Teaching the art of digeridoo playing in Western  Australia

The Barunga Festival has been on the Northern Territory calendar since 1985 and is now credited with "a long and proud tradition of celebrating the best of remote Indigenous Australia" during a three-day program featuring music, sport and traditional arts.

The June celebration takes place across the Queen's Birthday long weekend, with thousands of indigenous and non-indigenous visitors making the journey into the small community 80km south-east from Katherine along the sealed Central Arnhem Road.

In 2022 the schedule featured a didgeridoo competition, storytelling circles and musical performances while athletes from around the region came together to play Aussie Rules, softball and basketball.

AAT Kings connection – Top End Highlights is a seven-day sojourn that carries travellers to the far corner of Australia's Top End to see the sites that have long topped many a sightseeing to-do list like Kakadu and Litchfield national parks.

This hosted holiday also touches the territory celebrated during the annual Barunga Festival, with a two-night stop in Katherine that not only features a cruise through the famous gorge but a morning with Manuel Pamkal who is a Dalabon man passionate about sharing his story and showcasing the rituals of his people.

Australia's iconic Red Centre is the setting for Desert Mob, with Northern Territory Tourism describing the September carnival as "the most comprehensive survey of contemporary Aboriginal art" created by those living in desert communities across South Australia, Western Australia and the NT.

This year’s event will pay tribute to the pioneering people of Papunya – a tiny settlement 240km from Alice Springs/Mparntwe – who, five decades ago, founded an Aboriginal-owned collective devoted to producing works for a commercial market.

The 2022 program will see artists and audiences converge on the Araluen Arts Centre in Alice Springs and features three main components – Art Centres on Screen, the Exhibition, and a one-day Marketplace – with satellite arts occasions set to be slotted into the schedule.

AAT Kings connection – Outback Safari is an 11-day expedition through the Northern Territory with departures planned that would suit a pre-tour stay in Alice Springs/Mparntwe to enjoy the Desert Mob atmosphere.

This hosted holiday explores the Northern Territory's sunburnt heart – with a two-night stay at the Ayers Rock Resort to savour Kata Tjuta and Kings Canyon/Wattarka National Park as well as Uluru – before following the Stuart Highway north to Darwin via Karlu Karlu, Mataranka, Katherine Gorge/Nitmiluk, and Kakadu National Park.

The traditional West Australian lands of the Banjima people host one of Australia's favourite Aboriginal festivals, with Karijini National Park providing a backdrop for The Karijini Experience across five days during the April school holidays.

The event boasted a modest start, with the Pilbara Inland Chamber of Commerce hosting the inaugural Karijini Dinner Experience in 2013, but during the following years The Karijini Experience has evolved from a simple culinary encounter to a vast multi-arts event highlighting the region’s dynamic Indigenous culture.

In 2019 it featured 98 artists, 57 headline events and represented 16 Aboriginal language groups with the 2022 program stepping closer to pre-pandemic plans to include the original dining-under-the-stars moment as well as live music and family-friendly activities.

And, as organisers look towards 2023, they continue focusing on the original vision of creating an "authentic celebration that offers opportunity for people to come together and be enriched through connecting to this country and its people".

AAT Kings connection – Karijini National Park is a highlight of the AAT Kings' tours traversing Australia's spectacular west with Untamed Kimberley & West Coast and Wonders of the West Coast & Kimberley both epic 21-day adventures that explore the landscape between Darwin and Perth.

The itineraries cover the same territory, with one going north to south and the other touring in the opposite direction, and the list of stops include some of the most famous places in Western Australia and the Northern Territory. 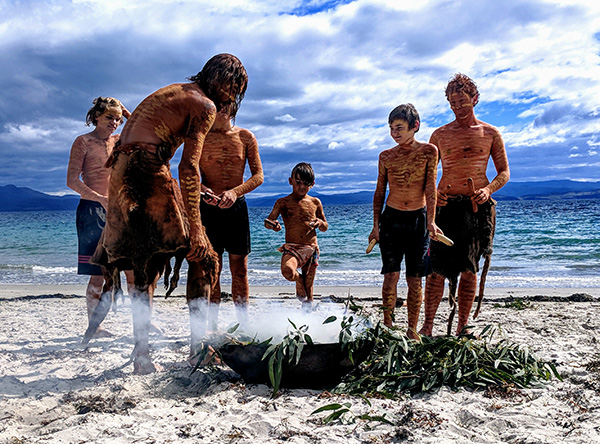