10 Facts About the Daintree Rainforest

THE Daintree is one of Australia’s most notable natural wonders, ranking right up there with the Great Barrier Reef and Uluru to top many a travel to-do list.

But did you know the patch of pristine rainforest that’s famous right around the world only makes up one compact corner of the 900,000ha UNESCO World Heritage-listed Wet Tropics of Queensland?

Or that the Wet Tropics is crowned by a string of stately summits that mark the northern perimeter of Australia’s Great Dividing Range, which starts 3500km south at the point where the Grampians rise from the Wimmera plains?

The Daintree Rainforest, and the Wet Tropics of Queensland, are as mysterious as they are magical with the jungle that’s home to more than 700 plant species living in 185 regional ecosystems one of Mother Nature’s true enigmas.

Have you ever wondered how many major rivers the Wet Tropics of Queensland feed? Probably not. But that number is 15, from the Annan which finds the sea a stone’s throw from Cooktown to the Burdekin that ends between Townsville and Bowen.

And, most remarkably, of all the waterways winding through the Wet Tropics of Queensland it’s only the Mitchell River that runs west to feed into the Gulf of Carpentaria with all the others meandering east to find the Coral Sea.

Here are a few more answers to questions about the landscape botanist and broadcaster Sir David Attenborough described as being “quite unlike any other rainforest in the world”.

1. HOW OLD IS THE DAINTREE RAINFOREST?

The Daintree is the world’s oldest continually surviving rainforest and, at around 180 million years of age, it’s 10 million years older than the Amazon with the consistent rainfall and humid conditions credited with keeping it thriving across the millennia.

2. HOW IS THE DAINTREE RAINFOREST PROTECTED?

The Daintree National Park, made up of the Mossman Gorge and Cape Tribulation precincts, was proclaimed in 1981 with the Wet Tropics of Queensland added to the UNESCO list in 1988. It satisfied all four of the natural wonder criteria and gained a place because the “biotope offers a particularly extensive array of plants, as well as marsupials and songbirds, along with other rare and endangered animal and plant species”. 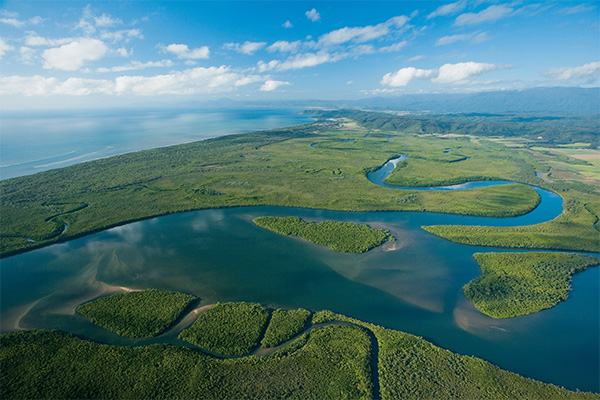 An impressive 65 per cent of Australia’s bat and butterfly species, as well as 35 per cent of the continent’s marsupial and reptile species, call the Daintree home. The environment is also home to 47 animal species that are listed as threatened including the southern cassowary and mahogany glider. 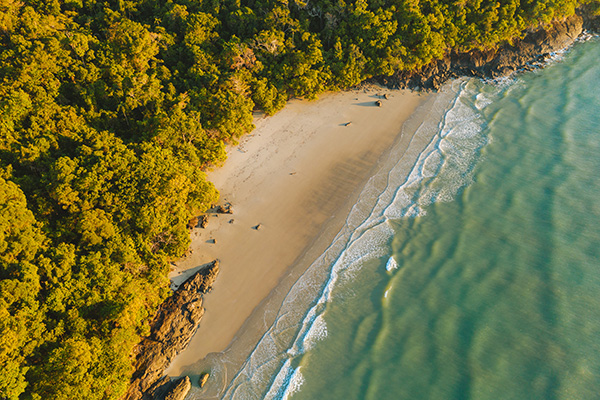 4. HOW WET IS THE WET TROPICS?

A critical component of any rainforest is rain and while an average of 2000mm of precipitation falls on the Daintree every year – with 60 per cent seen during wet season, between December and March – that quantity can climb as high as 9000mm.

5. HOW BIG IS THE DAINTREE RAINFOREST?

The Mossman Gorge section covers 56,500ha of mostly inaccessible rainforests and mountain woodlands, while the Cape Tribulation precinct takes in 17,000ha of Australia’s most extensive stretch of lowland rainforest. The Wet Tropics of Queensland stretches 450km across the Sunshine State’s coast from 100km north of Cape Trib to the Paluma Range above Townsville.

6. IS THE DAINTREE THE ONLY RAINFOREST NATIONAL PARK?

The Wet Tropics of Queensland, which is wrapped in a 3000km perimeter, is home to 30 national parks and, since the UNESCO listing 34 years ago, that national park territory has increased from 13 per cent to 85 per cent. 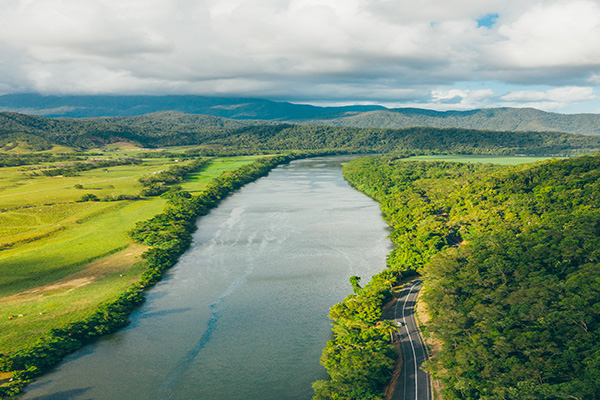 7. HOW HIGH IS THE WET TROPICS OF QUEENSLAND?

The state’s tallest mountain Bartle Frere, which flanks the Bruce Highway between Cairns and Innisfail and climbs to 1622m, is the highest spot inside the Wet Tropics of Queensland. Its neighbour Bellenden Ker adds to the UNESCO zone’s height with a 1593m summit and the peaks mark the Josephine Falls section of the Wooroonooran National Park.

8. DO MANY INDIGENOUS TRIBES CALL THIS COUNTRY HOME?

Far North Queensland’s rainforests is country to 20 Aboriginal tribes, 120 clans and eight language groups. Today more than 20,000 people hold an ongoing traditional link to the land and native title accounts for 90 per cent of the ground inside the World Heritage zone.

9. ARE THERE PLACES TO SWIM IN THE WET TROPICS?

Far North Queenslanders love nothing more than soaking in freshwater during a steamy wet season day and there are streams, lakes and waterfalls dotted around the Wet Tropics that become prime swimming spots when the weather is warm. Josephine Falls, Lake Eacham, Mossman Gorge, Malanda Falls and the Alligator’s Nest are all loved by locals.

10. IS THE WET TROPICS JUST RAINFOREST?

While the UNESCO precinct is predominantly rainforest there is also open bush, woodland, wetland and mangroves with the region listed as the second most irreplaceable natural world heritage site on earth by the International Union for the Conservation of Nature. 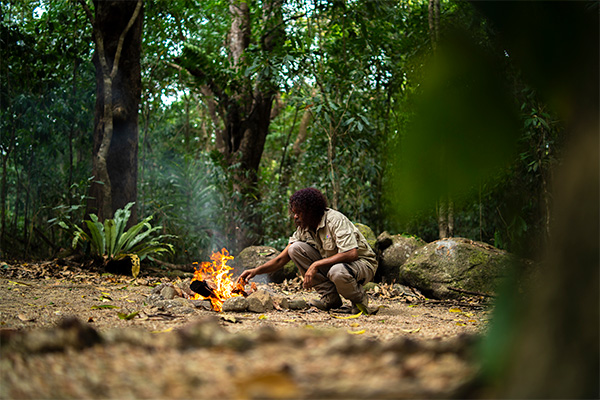 WHAT’S THE BEST TIME TO VISIT THE DAINTREE?

The short answer is there’s no wrong time to visit the Daintree Rainforest and Wet Tropics of Queensland. During the dry the sky is reliably blue, the temperature hovers around the high 20s, and the rivers gurgle rather than race.

But those that can embrace the tropical wet-season warm will see the region’s rainforests at their best with the jungle turning lush shades of jewel-like green and the rumbling waterfalls that accompanies the weather.

AAT Kings carries travellers into the Daintree 364 days a year – the team takes a break on December 25 – with Cape Tribulation, Daintree & Mossman Gorge a popular day excursion delving into the planet’s oldest rainforest.

10 Facts About the Daintree Rainforest
ADDED TO BROCHURE

10 Facts About the Daintree Rainforest
ADDED TO BROCHURE