I’m in love. Her name is Saskia. She’s a petite girl with big, beautifully proportioned fluffy ears and as Terri Irwin put it, a face that looks like she’s been “drawn as a Disney character”.

When Saskia held me last weekend, my heart melted. This little female koala with just one arm changed something inside me forever. I never before thought of myself as a wildlife warrior. Don’t get me wrong, I love animals. I had a pet kangaroo and countless other animals for years as a child and my own daughter has not waivered since the age of two that she is “going to be a zookeeper”. But over the last few months as I worked toward delivering on AAT Kings’ partnership with Australia Zoo Wildlife Hospital, the plight of the koala in South East Queensland has become more apparent and I’m excited to now be one of the many working towards making a difference. 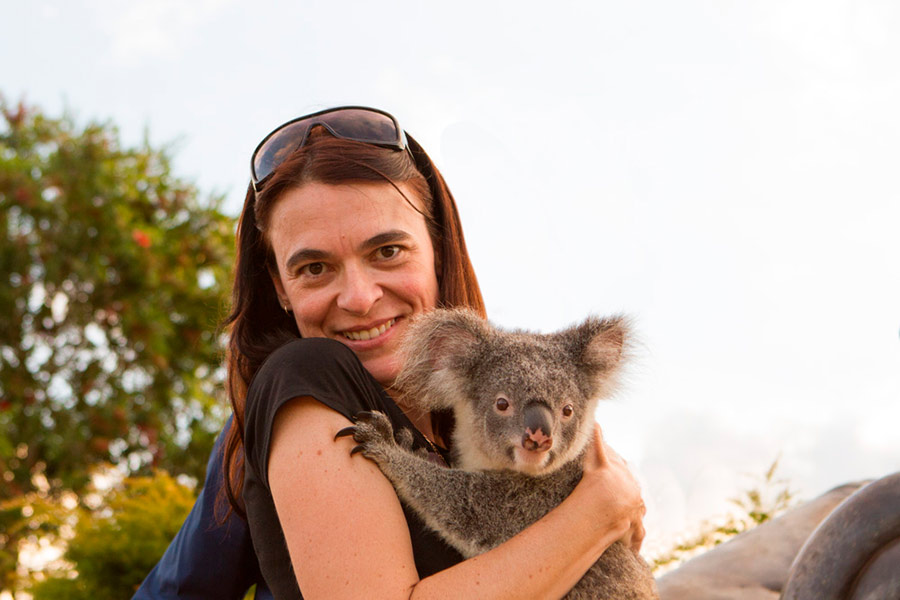 I’m lucky enough to be working for a company that is also interested in making a difference, We’re not only investing in direct donations to help make a change, we’re putting our people and the people that travel with us to work to make a difference too.

I had the opportunity to meet Saskia when we travelled to the zoo to do some filming so we can share our conservation story with you. See our video below. Saskia spent months in rehabilitation in the Australia Zoo Wildlife Hospital and as a result of losing her right arm, she cannot be returned to the wild. She now lives in Australia Zoo, where the team make sure her enclosure is challenging enough, but safe for her to move around with one arm. You can feel the affection towards this little girl from everyone on the team at Australia Zoo, but of course every single one of them would prefer that Saskia was still living a wild life out in nature.

Sadly, Saskia is one of too many koalas the hospital has through the doors. Stop and think about this for a minute…. While we were there, the hospital had 60 koalas in for treatment. It’s a slow month. Yes, 60 is a slow month. During the months of the year when koalas are moving around at breeding time there is up to 100 koalas in the hospital at any one time. Add to that the number of Koalas that don’t make it to the hospital, or are being treated in vets around the area and the numbers are staggering. 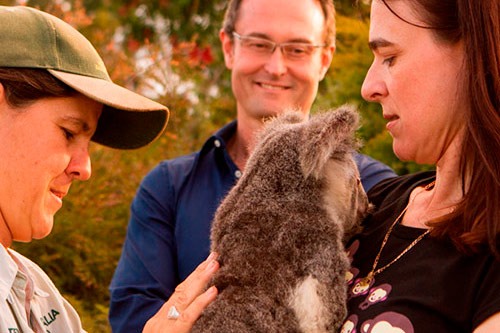 Some of the patients make it through, others don’t. Cars and dogs are the biggest contributors to the increase in admissions. Dog bites on a Koala’s soft tummy cause great damage and require hours of surgery to fix.

We met a little five to six year old koala called ‘Highlander’ who had been attacked by two dogs. The 25 visible staples along his abdomen (plus countless more internal stitches) as well as numerous puncture wounds on his back were confronting to take in. He’ll spend three months in hospital without complications. He’ll stay in ICU until stable, and then head to the outside wards to learn to climb again and regain fitness.

It’s not a cheap exercise to nurse these koalas back to health. But we must. Before European settlement in Australia, there were millions of koalas in the wild. There are now fewer than 100,000 koalas in the wild. With habitat shrinking every day as our cities encroach on their environment, bringing dogs and cars ever closer, things are only going to get worse if we don’t do something.

Environmental protection, we’ll leave that conversation for another day, but support for this amazing hospital that is doing amazing things to help Koalas return to the wild…..how can we help? 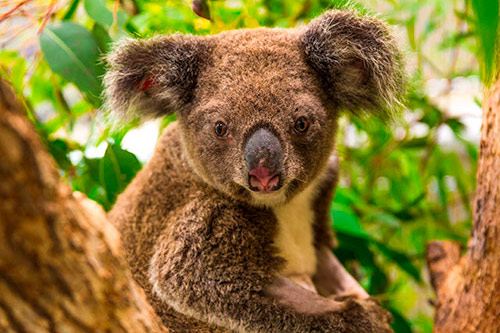 Every guest who travels to Australia Zoo has a $2 donation made to the wildlife hospital by AAT Kings on their behalf. Every guest also has the opportunity to purchase ‘Sam’, a stuffed koala toy who is the new mascot of AAT Kings. A portion of the sale of every ‘Sam’ will go to the wildlife hospital. AAT Kings has also made a significant corporate donation with the Treadright Foundation to support the Koala rehabilitation program. Throw in volunteer staff days at the hospital and an opportunity to spread the word about Koala conservation in general and we know we’re on our way to making a difference. Please join us!

Take some time out with the animals on our Brisbane & Australia Zoo tour.