The document was only the fifth dual-language bill to progress through the country's parliament and created a public holiday recognising what the New Zealand Herald described as "the Māori body of knowledge around the period of the Māori lunar calendar".

The occasion falls on the closest Friday to the Tangaroa lunar phase – the rising of the last quarter moon – of Piripi, and marks the beginning of the Māori New Year.

"It provides us with a unique, new opportunity to embrace our distinctive national identity," the MP from the North Island’s east coast said.

"Matariki is a time of unity, renewal, celebration, and hope. With the challenges we have faced in recent times, it allows us to come together with whānau and friends to pause, reflect and look optimistically to the future." 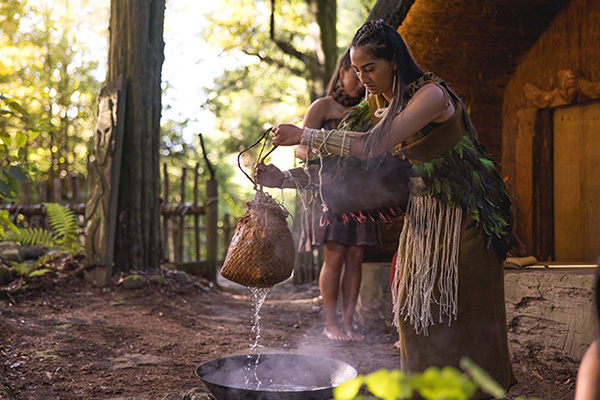 The first public holiday to celebrate Matariki will be on Friday, June 24, 2022 and the traditions of the past will endure with Kiwis set to gather for fireside celebrations featuring food, music and storytelling.

A member of the Inspiring Journeys New Zealand team described the Māori New Year as being a little like North America’s Thanksgiving with people bringing family and friends together for a feast to “reflect, be thankful, and look forward”.

Public celebrations have also been organised across the country to celebrate this first Matariki public holiday in style. The Bay of Islands Matariki Festival is in the diary from June 17 to July 31, the Matariki Arrowtown Lights scheduled for June 24 to 26, and the capital Wellington is hosting a program of “live and digital experience” across the long weekend.

Dunedin will celebrate the inaugural holiday during an immersive show across the harbourfront that combines light and water, Tirama Mai will illuminate the Christchurch cityscape between June 24 and July 3, and there will be fireworks at Lake Wanaka on June 25.

BUT HOW DOES MATARIKI FIT INTO NZ MĀORI CULTURE?

Matariki is an abbreviation of Ngā Mata o te Ariki Tāwhirimātea – or The Eyes of the God Tāwhirimātea – and links with an array of stars that light up the mid-winter sky to signal the changing of the seasons.

The celestial group, which astronomers know as the Pleiades or The Seven Sisters, is more than 800 stars located 410 light-years from Earth in the constellation Taurus and looks like a compact and blurry version of the Big Dipper to those gazing up from below.

"Māori tribes have various approaches to just about everything but, for a large group, Matariki was the sign that denoted the beginning of a new year and the change of the seasons," the University of Waikato professor explained.

"Matariki is built around crucial values like remembering those people no longer with us, and we farewell them. And celebrating the present with food, coming together, unity, collectivity, and planning for the future.

"One of the things Matariki was central in, apart from our unique and diverse systems of time, is Matariki helped to reaffirm bonds we have with each other – those that have passed, those that are still with us, and those that are too come.

"It is a very important celebration and period of time that helps to embed those central values into us and our community."

At the last count, conducted in June 2020, it was estimated New Zealand's ethnic Māori population sat around 850,000. That's roughly 16 per cent of the national population, with that number growing by 2 per cent in the 12 months to the census date.

Tracing the Māori story back to its foundations, Britannica tells us "their traditional history describes their origins in terms of waves of migration that culminated in the arrival of a 'great fleet' in the 14th century from Hawaiki". But you won't find that Polynesian place on a map, with legend telling us the destination is a mystical land typically identified as Tahiti.

The Māori were hunters, gatherers and gardeners with seafood making up a large part of the diet. They typically cooked the meat and vegetables they raised in an earth oven called a hangi with the ingredients wrapped in flax leaves and placed on hot stones in the bottom of a pit that was then filled with soil or sand to steam for several hours.

Today people define themselves first by their iwi, or tribe, and then by their sub-tribe hapu. And, continuing the tradition of village life, communities now boast a communal area called a marae that’s home to a wharenui meeting house and whakrekai dining hall where meetings and celebrations take place.

Te Reo Māori is one of the country's three official languages – English and New Zealand sign language are the others – and the 2017 census revealed around 50,000 people spoke the native tongue "well or very well".

FIVE THINGS YOU NEED TO KNOW ABOUT MĀORI CULTURE

But there's more to the Māori than population numbers, historical anecdotes and anthropological arrangements. So, read on to discover some cultural insights every traveller to the Land of the Long White Cloud needs to appreciate before setting foot onto the magical and mystical destination traditionally known as Aotearoa.

Ta moko is the traditional art of tattooing, and fundamental to Māori culture, with every pattern unique because it reflects an individual's whakapapa – or ancestry – as well as learning and social status in their community.

Men receive the mataora, women the moko kauae, with the symmetrical black lines swirling around the face because the Māori believe the head is the most sacred part of the body. But tattoos, traditionally applied using the sharp end of a bone dipped into pigment and tapped into the skin, can be applied to other parts of the body from the neck, back and stomach to calves and forearms.

The main lines are called manawa, or heart, and signify life's journey, while the koru represents the fronds of a silver fern uncoiling to represent a change of path. Some shapes are universal, including swirls that cross the lower parts of the face from the nose and cheeks to the jaw, with these markings made to enhance and emphasise facial expressions.

2. THERE'S MORE TO THE HAKA THAN BRACING FOR BATTLE

If there's one thing that everyone – or at least everyone that's watched an All Blacks game – knows about the Māori culture it's the haka.

But the dramatic routine commonly labelled a war dance is much more than that, with variations for every occasion including the manawa wera haka that’s performed at funerals to the ngeri haka used at motivational meetings.

The peruperu haka is the version performed as a war dance and defined by the use of weapons and leaping movements, with the accentuated expressions that see the tongue poking out and eyes bulging not only meant to intimidate opponents but to summon the God of War.

3. THE MĀORI WELCOME VISITORS THEIR WAY 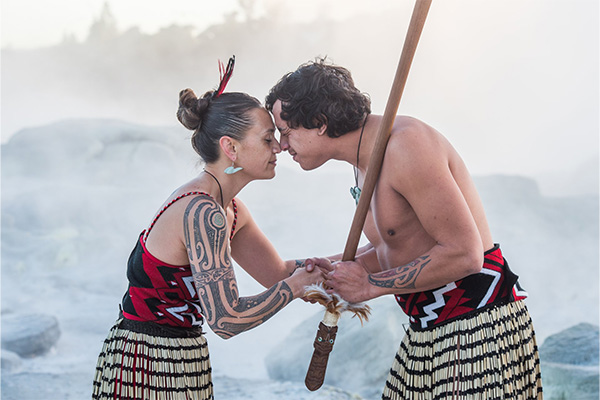 The traditional Māori greeting is called the hongi and exchanged when two people hold their noses and foreheads together for a few seconds upon meeting for the first time. Each person must shut their eyes and breathe deeply, so they can share the "breath of life" and mark the peaceful and symbiotic moment where souls are meeting.

Another formal welcome is expected when strangers visit a marae – the Māori meeting ground, now a community gathering place – with a Māori warrior "challenging" the visitors during the brief but theatrical powhiri ceremony.

While an advancing warrior, wielding a spear and wearing confrontational expressions accompanied by ominous chanting, may appear intimidating it's a peaceful exchange that lets those approaching prove they mean no harm to those inside the community.

There was no written language before the first European settlers arrived during the early decades of the 19th century, with the first Māori residents of the islands Abel Tasman called the "Great Southern Land" using storytelling and carvings to pass information forward to the next generations.

Māori carving, in stone and bone as well as wood, is rich in symbolism but varies between tribes with the tiki used to represent a human figure and the manaia a character associated with guardianship and illustrated with a bird-like head and serpent-like body.

The kaiwhakairo artisan carvers also use traditional patterns drawn from the natural environment including fish scales and unfurling fern fronds, with kauri and totara the preferred woods used to record historical events and the pounama greenstone worn as jewellery to signify standing.

5. MĀORI CULTURE IS NEW ENOUGH TO BE PERSONAL

The first Māori arrived in New Zealand during the 14th century – making this one of the world's youngest cultures – with legend explaining Kupe was the first intrepid explorer to reach the North Island's shores after a long voyage from another part of the Pacific.

The great explorer used celestial navigation and relied on ocean currents to guide his waka hourua canoe across the deep blue to the Hokianga Harbour, with dozens of other brave travellers taking the same route during the next few centuries.

Māori are part of an iwi, a "group of people related to a common ancestor and associated with a certain region or area in New Zealand", and each tribe can trace their history back to the waka hourua that carried their ancestor to the Land of the Long White Cloud.

When visiting a location like the Waitangi Treaty Grounds, the historic space beside the Bay of Islands that played a role in establishing the modern New Zealand, it's not uncommon to be guided by the descendent of one of the 540 rangatira chiefs that signed the Treaty of Waitangi. 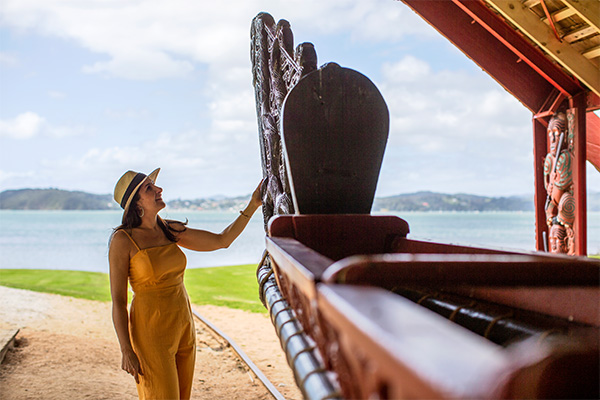 Visiting New Zealand and not connecting with Māori culture is like going to Waitomo and not seeing the glow worms, stopping in Kaikoura without feasting on fresh seafood, and passing on the chance to sample the signature sauvignon blanc at a family-owned winery while wandering Marlborough.

Inspiring Journeys, and sister brand AAT Kings, hang their hat on incorporating indigenous encounters into itineraries. Both companies combine with grassroots organisations across New Zealand to ensure these experiences are sustainable and responsible as well as insightful and informative.

The Long White Cloud is a 19-day expedition around both islands – the Inspiring Journeys' tour starts in Christchurch and makes a loop of the South Island taking in Queenstown and Milford Sound before venturing north to Auckland via Wellington and Rotorua – that counts a Māori hangi as a highlight.

The experience comes during a two-night stop in Rotorua with our guests invited to spend an evening at Tamaki Māori Village to learn about traditional weapons and flax weaving, see bygone stories told through song and dance, and dine on home-grown vegetables cooked in the earth oven.

This opportunity to discover local Rotorua culture and customs also comes during Inspiring New Zealand, a shorter 10-day adventure that starts in Auckland and travels south to Christchurch after calling at Rotorua, Wellington and the famous Fiordland National Park.

An evening at Tamaki Māori Village offers a rare chance to spend time with locals that are proud of their heritage and not only use the opportunity to interact with travellers from faraway places to share their stories but present the next generations in their own community the meaningful moments needed to ensure their rituals survive. 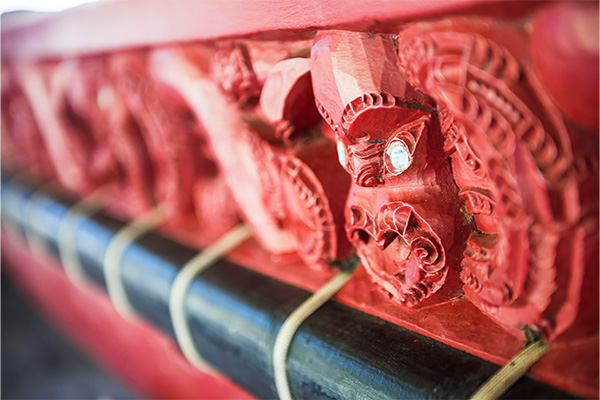