Our past guest Val Bird talks about her recent experience on an AAT Kings Guided Holiday "New Zealand Vista". Learn about her favourite experience and what it was like travelling with AAT Kings.

Upon our arrival in Auckland we were immediately welcomed and put at ease by our Travel Director and fellow travellers, which turned out to be a mixed bunch from around the world who we had a relaxed ‘say hello’ meal with.

She who never crawls out of bed usually until 8am was efficiently scrubbed-up, fed and ready to board the coach on time. After an Auckland highlights tour we headed to Waitomo, the home of the famous glow-worm caves, and then we travelled onwards for a pleasant countryside drive to Rotorua. 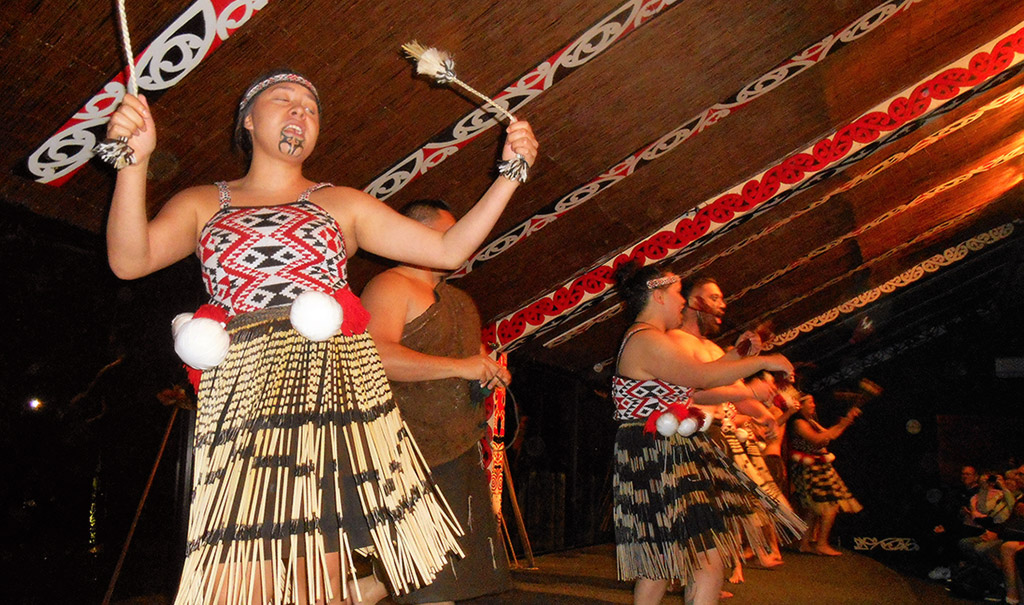 We headed to Tamaki Marae where we spent the evening. It turned out to be an amazing cultural, humorous, unforgettable experience full of songs and education about Maori culture combined with down-to-earth Kiwi humour. The hangi food was first class with compliments flying!

We paid a visit to the Agrodome Sheep Show, which was amazing. They have their act down to perfection with sheep, dogs, lambs and ducks all happily doing their act on cue – very enthusiastic sheepdogs! Afterwards we wandered downtown and had lunch. Later we checked out the flash restaurants of Eat Street, then popped into the Pig and Whistle to finish off the night.

After a stormy night, Rotorua put on a crystal clear blue sky to farewell us. The first stop along the way was Huka Falls, which our travel companions thought was fabulously blue and so boisterous. Next stop was Taupo for a coffee stop, then over the Desert Road to Taihape. We drove into Wellington and while some of our team were going out for a night on the town, we had a wine or two and then snuck off for an early night.

After paying a visit to Te Papa to view the Gallipoli display, which truly hit the heart, we had some lunch and wandered the Wellington waterfront watching the various goings-on and soaking up the happy-go-lucky atmosphere. The ferry trip across Cook Strait was smooth and uneventful, and we spent the night in Picton.

We arrived in Christchurch and did a spot of shopping before having a beer in the temporary container mall, then went back to the hotel for dinner. 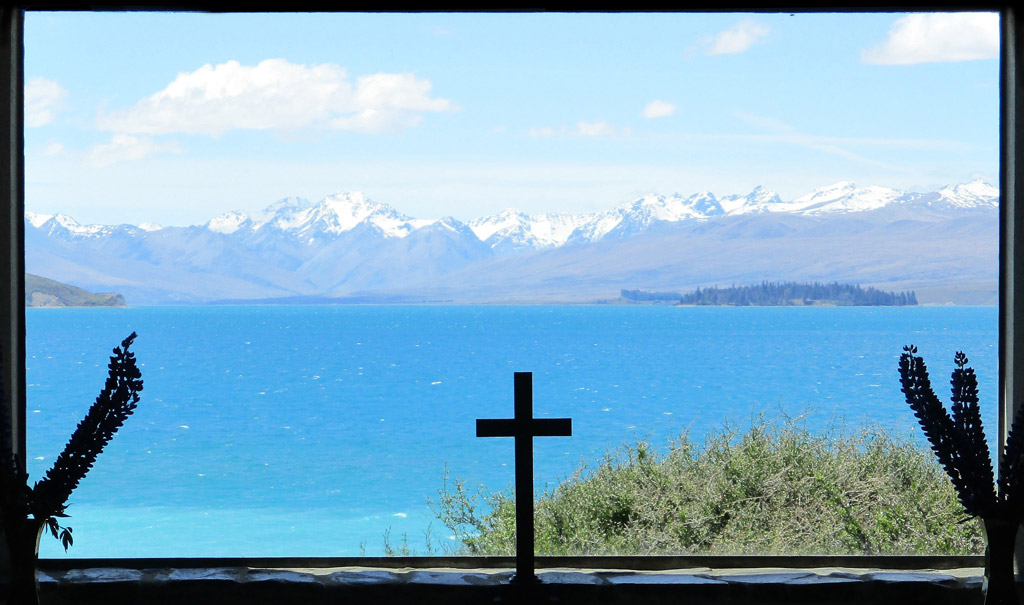 The next day, after a visit to the quake memorial and the Cardboard Cathedral, we departed Christchurch mid-morning heading for Omarama via The Lakes, The Church of the Good Shepherd, Canterbury Plains and Mckenzie Country, with a lunch stop at Geraldine. The Lakes were as stunning as ever, but Mount Cook unfortunately had some stray clouds on her peak! However, clouds and all it was truly awesome and cameras were clicking non-stop.

It was an early departure for the run to Dunedin via Waitake Power Station, Benmore Dam, Oamaru and the Moeraki Boulders. Magnificent scenery all the way and we arrived into Dunedin to a hot day with tar melting on the roads. We explored the settler’s museum where we found some photos of my pioneering family, then admired the ornate railway station – an architectural dream. At each destination there are optional extra outings such as sightseeing flights, boating trips and farm visits for those who wish to go. Having been here before, we decided to use the time as ‘quiet time out.’ It was a take-it-easy trip to Te Anau the next day.

A big day today, travelling from Te Anau, Milford Sound, back to Te Anau, then on to Queenstown. 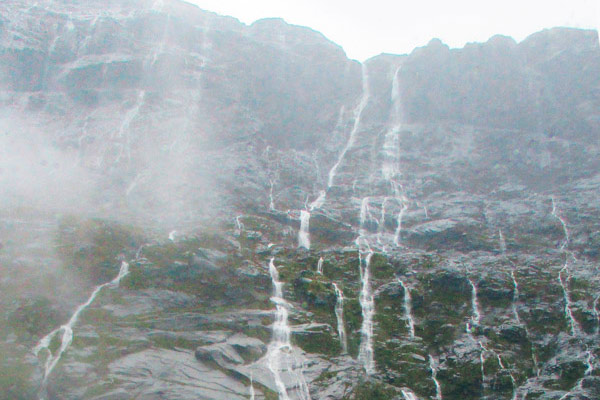 Due to a spot of rain our boat trip around Milford Sound was picturesque waterfalls after waterfalls, mixed with the high-rise majesty of the surrounding peaks. It was totally and absolutely awesome.

The next morning was cool but fine with a sprinkling of fresh snow on the Remarkables. After a wander, we settled into a waterfront café for a coffee, then went back to ambling around the waterfront. One of the highlights was watching the Earnslaw depart, as tonight it would be our turn! On the main deck of the Earnslaw lives a baby grand piano, so on the way home there was an old fashioned piano sing-a-long to darling old favourite songs from around the world. A lovely end to the day. We waved a chilly goodbye to Queenstown to head to Franz Josef, which had had a light sprinkling of mountain-topping snow overnight. Our first stop was Arrowtown – you’ve just got to love this place. Historic, nostalgic and totally charming.

After an evening in Franz Josef, we departed mid-morning to head back to Christchurch and stopped at Hokitika for lunch, then off to Arthur’s Pass, with totally majestic scenery along the way. I was desperately looking out for kea which had so far eluded me on both my visits down this way! 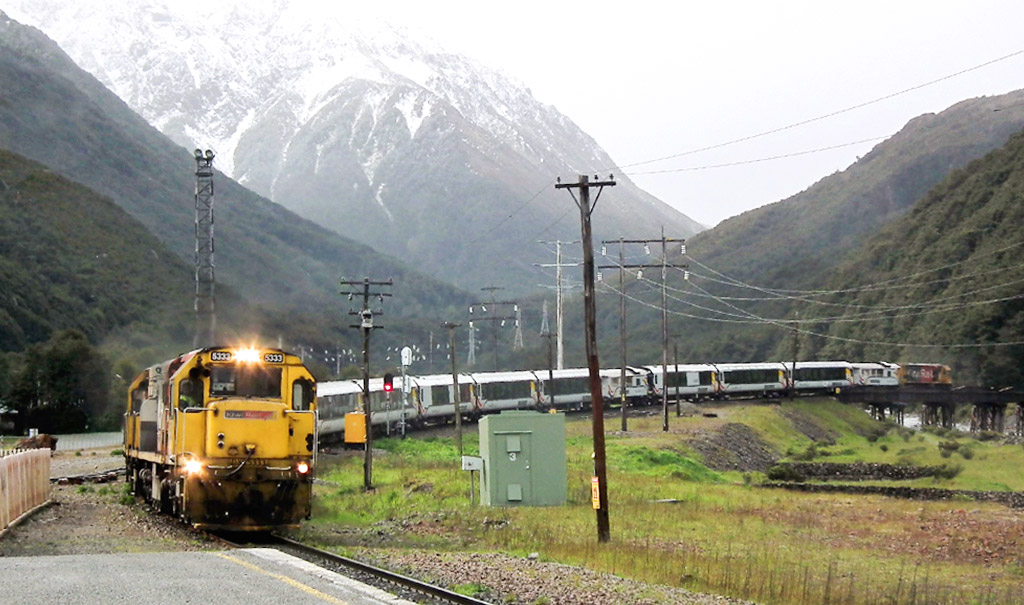 We were dropped at the railway station to catch the Tranz Alpine Express while the coach travelled by road to meet us in Christchurch. There was a happy excitement when the train chugged its way out of the tunnel and we settled down onboard for what was one of the greatest scenic delights of the entire trip. As if moving from one climate to another, as we travelled the sun came out, the sky turned blue, the arctic dressers among us started shedding layers of clothing and we arrived in Christchurch to brilliant sunshine.

One thing I was asked frequently was:

Why, as New Zealanders, are you going on a coach tour of your own country? I was asked frequently, “Why not?” I always answered. AAT Kings allowed us to both sit back and relax. Everything was arranged for us, all we had to do was pack a bag and turn up on the day. Here was a chance to simply lay back and take pleasure in the scenery as well as the opportunity to see NZ through a tourist’s eye.

On the final evening there were oodles of good cheer, cuddles and sweet stuff, for we all knew when the morning dawned we would go our separate ways. We were told at the beginning of the adventure we would end up feeling like family, and yes, we did!

And I’d do it all again. 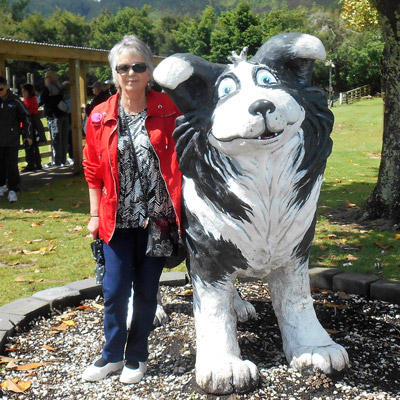 By Val Bird, Past Guest of AAT Kings