Kia Ora! We hope you have been keeping well and staying inspired, #AAThome.

As part of Earth Month 2020, we are pleased to introduce this gorgeous kiwi chick who was hatched on February 1st, 2020. This chick can’t wait to get back out into the pristine New Zealand bush, but first, it needs your help!

As a founding partner of the not-for-profit TreadRight Foundation, we are proud to support the National Kiwi Hatchery team at Rainbow Springs in Rotorua, who are true heroes for kiwi conservation. As the largest kiwi conservation hatchery in the world, 55% of kiwi chicks nationwide are hatched here.

Did you know that most kiwi chicks don’t survive in the wild due to predators such as stoats? The incredible New Zealand Department of Conservation monitor kiwi eggs in the wild before they are brought to the National Kiwi Hatchery partially incubated. The incubation is then artificially replicated. After the eggs hatch and the chicks emerge, which takes around 78 days, they are given a full medical check-up and placed into brooder boxes where they stay until they are three weeks old. At this point, they are released into outdoor enclosures that closely mimic forest conditions. This is where they enjoy their start to life until they reach 1kg and are released back to their home forest.

How can you help? By naming this chick! We want your suggestions to give this kiwi an even better start to life in the hatchery. 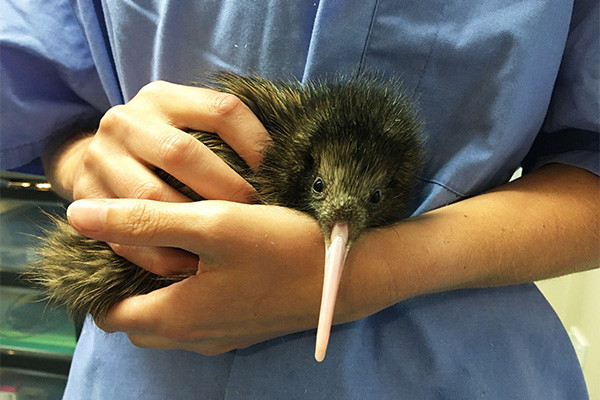 Help us name this kiwi chick!

All about this chick:

“Kia ora! I don’t have a name yet! I have been sponsored by the Treadright Foundation & AAT Kings - they do a great job at supporting The National Kiwi Trust. Thanks guys - you’ve really increased my chances of survival and I can’t wait to get back out into the New Zealand bush! Here’s a bit about me so far…”

History as an egg:

Hatched on 1st of February 2020, this precious kiwi had already been partially incubated by dad Charlie, when Barry from the hatchery picked it up and popped it straight into an incubator.

This is a cool, calm and collected kiwi, who is curious and loves to look around the room when out of its brooder box.

Kiwis can actually sense prey’s vibrations under the dirt with tiny sensory pits, and whiskers help it feel its way in the dark to assist in locating kai (food).

This kiwi’s gender is a bit of a mystery at this stage, but a few feathers have been sent to Massey University for DNA testing. When kiwi chicks are little, they all look very similar (and adorable!)

When the kiwi reaches 1kg, it will go back into the forest and stake out its own territory, and hopefully a gorgeous kiwi family of its own!

Help us give this adorable kiwi chick a name by commenting with your suggestion via this Facebook post, and ensure you have liked the National Kiwi Hatchery , as well as ours. Entries close on Monday 4th May at 11pm. The winning name will be announced on the Wednesday 6th of May at 4pm via our Facebook page and Instagram. We can’t wait to see your suggestions!